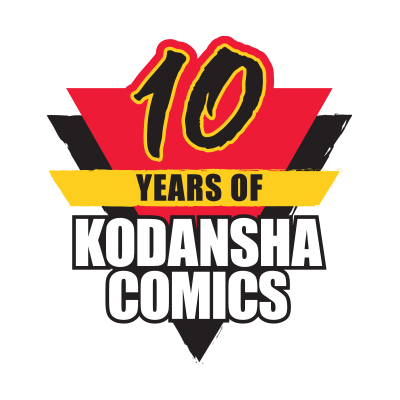 The year 2019 marked the 10th anniversary of the first Kodansha Comic published in English! Thank you for celebrating with us all year long as we head into the next exciting decade.

Our December Spotlight needs no introduction, and we’re sure many of you have already guessed which major series was yet to be featured. Without further ado, we’re thrilled to feature Hajime Isayama’s worldwide sensation Attack on Titan! It’s also just in time for the series latest entry, Volume 29! So what are the final “special surprises” that we have in humanity’s darkest hour? Check these out! 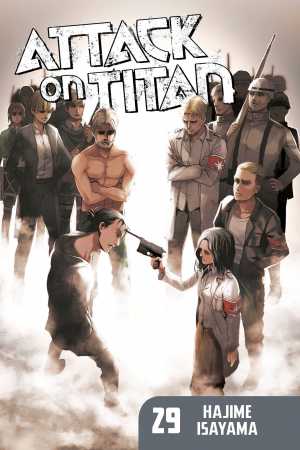 Newest Volume 29 is out today! Attack on Titan Volumes 1-29 are available now from Kodansha Comics! 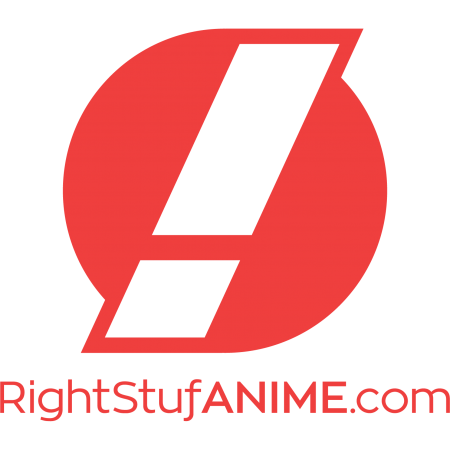 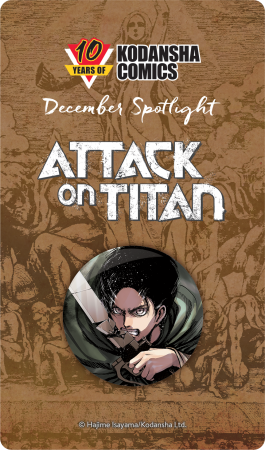 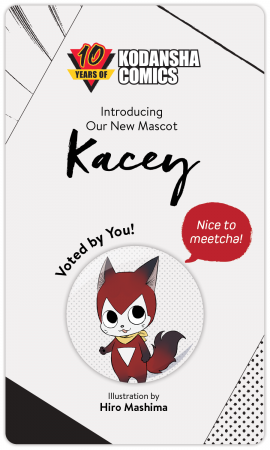 As a part of the 10 Years of Kodansha Comics project, we’ve teamed up with our friends at Rightstuf to bring you this awesome Attack on Titan Pin!

Visit Rightstuf and order any volume of Attack on Titan or the series’ spin-offs and you’ll receive an exclusive pin for FREE! Your order will also come with our new Kodansha Comics mascot Kacey pins! Available this month (December 2019) only or while supplies last. 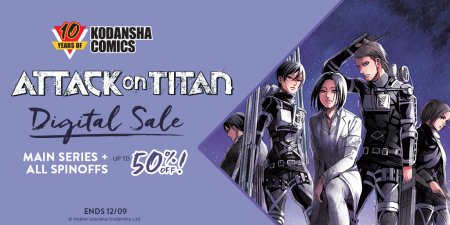 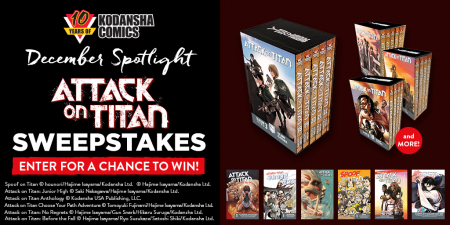 For the month of December only, ONE lucky winner will win a set of this entire haul!!!

All you have to do is take this survey by December 31 to enter for a chance to win!

In case you didn’t hear the news (or the screams) you can still find a massive Attack on Titan mural produced by Colossal Media near Madison Square Garden, on 31st Street between 7th and 8th Avenues!

Kodansha Comics—along with our pals at Anime NYC, Funimation, and Kinokuniya—are hosting a photo contest until December 15th, 2019. Here’s what to do:

Just take a photo in front of the mural, tag us #AOTinNYC and #AnimeNYC! Winners will get awesome prizes from all of us!

Check out how the fans have been reacting to the mural so far!

Thank you again for celebrating  10 Years of Kodansha Comics with us all year long!