The protagonist of Inuyashiki is not a hot guy or girl. Ichiro Inuyashiki is 58 years old and often gets mistaken for his daughter’s grandfather. One day he encounters an unidentified flying object. His body destroyed, he awakens to realize he has a new mechanical body. That’s when Inuyashiki’s journey to find the meaning of life—by saving other people’s lives—begins.

This unusual action hero series by Hiroya Oku (whose previous work was the megahit GANTZ) ends at Volume 10. (Volumes 1-9 are currently available from Kodansha Comics in print and digital; Volume 10 comes out soon—December 19.) But the story lives on: Inuyashiki’s been adapted into an anime, now streaming on Amazon Anime Strike, and will also be a live-action film in 2018.

Oku-sensei shares his thoughts about the conclusion of Inuyashiki with two of his editors in this special interview that originally appeared online at Kodansha Comic Plus. It appears here in English for the first time.

Shiota (editor): Back when we started Inuyashiki in 2014 and I received the manuscript for the first chapter, I remember Oku-sensei saying, “If readers accept this manga, I think I’ll have succeeded in doing something new.”

Hiroya Oku: While I was still working on GANTZ at Weekly Young Jump, you made me an offer to let me work on whatever I wanted for Evening magazine. The theory around then was the main character of a manga series always had to be good-looking, even if it’d be unlikely in its setting. So I thought, if I could draw whatever I want, I’d change this one aspect. Initially I was thinking about making a not-so-good-looking virgin kid the protagonist. But as I was drawing, something wasn’t quite right. That’s when I switched up and drew an old guy. That’s how the idea for Inuyashiki came about.

Shiota: In general a manga editor works with the artist chapter by chapter. We take steps to come up with the story concept, share a rough sketch of each chapter, then do rounds of feedback to get to the final chapter manuscript. But in the case of Inuyashiki, we didn’t go through any of those steps. Oku-sensei would just show up with a completed manuscript. It was the first time as an editor I’d experienced such a thing. Even if I asked Oku-sensei, “What’s going to happen next?”, he’d only say “Well, you’ll see … ” [laughs] I think all he wanted from an editor was to be a first-time reader.

Oku: Maybe. I remember showing you Chapter 1 at the rough-sketch stage, and you told me “This is good.” But after that, I didn’t have to go through any consultations with editors. I was completely free, and I was really happy about that.

Shiota: The climax scene of Chapter 1 already left me so surprised.

Tamura (editor): That’s the scene where an unidentified object destroys Inuyashiki’s body, and in order to cover it up, they use a powerful machine, powerful enough to destroy Earth, to replace Inuyashiki’s body. The scene was so well drawn, I couldn’t keep my eyes of off it.

Oku: It took me about five days to draw that scene. [laughs]

Tamura: That’s how Inuyashiki attains the power to fly. Those flying scenes are amazing too.

Oku: I was obsessed with those flying scenes.

Shiota: I remember you were collecting a lot of different references to draw those flying scenes. You even went and chartered a helicopter. The thing with a helicopter, though, is it’s hard to get a shot close to the ground.

Oku: I really wanted to show the entire process of takeoff. So I asked around for a remote-control helicopter, and that’s when I found out about drones. Back then, drones weren’t as well-known or common, even as film-shooting technique.

Shioda: For the scene where Inuyashiki and the good-looking villan, Hiro Shishigami, fight while flying over a freeway, we couldn’t possibly fly the drone over a freeway, so we chartered a double-decker shuttle bus, and we shot reference photos from the upper deck.

Oku: I really appreciated your cooperation on that. 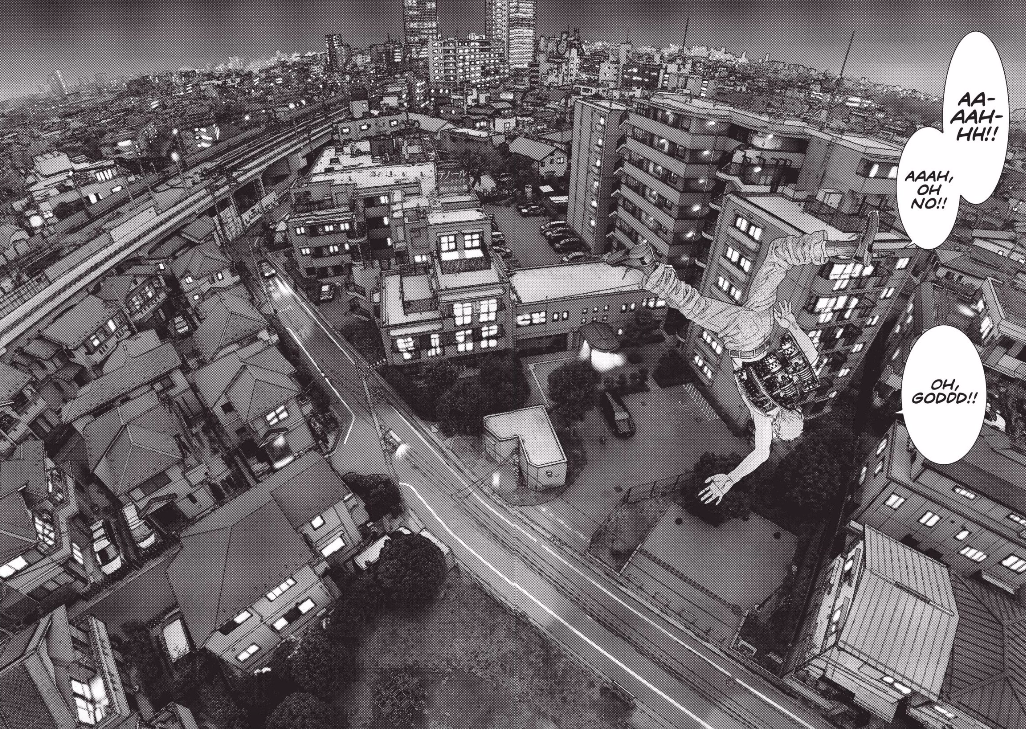 Shiota: I remember you saying he enjoys drawing the wrinkles on old man Inuyashiki.

Oku: A human body is not flat. There’s skin over the bones. I was happy to be able to draw how the skin and bone structure work together. [laughs] Usually I just want to draw naked girls, but in this series, I was always drawing a naked old man.

Tamura: Did you want to draw Inuyashiki more heroically?

Oku: Not really. Inuyashiki appears to be just a hunchbacked old man. It’s not about appearance or poses, but the actions of a person that makes them an awesome hero. I wanted to draw a true hero like that through the story of Inuyashiki.

Shioda: I’ve always wanted to ask Oku-sensei: what does it mean to “draw a person” in manga?

Oku: It is to draw a character that gives you the illusion that they could exist in real life. To the point that you can see a vision of “what this person would do in such-and-such situation.” To draw something like that, you have to have a really good sense for observation and go through lots of trial and error.

Tamura: Even though Ichiro Inuyashiki is suppose to be a cyborg, he seems like a real human being from his expressions, actions, and even the subtle movements of his body. 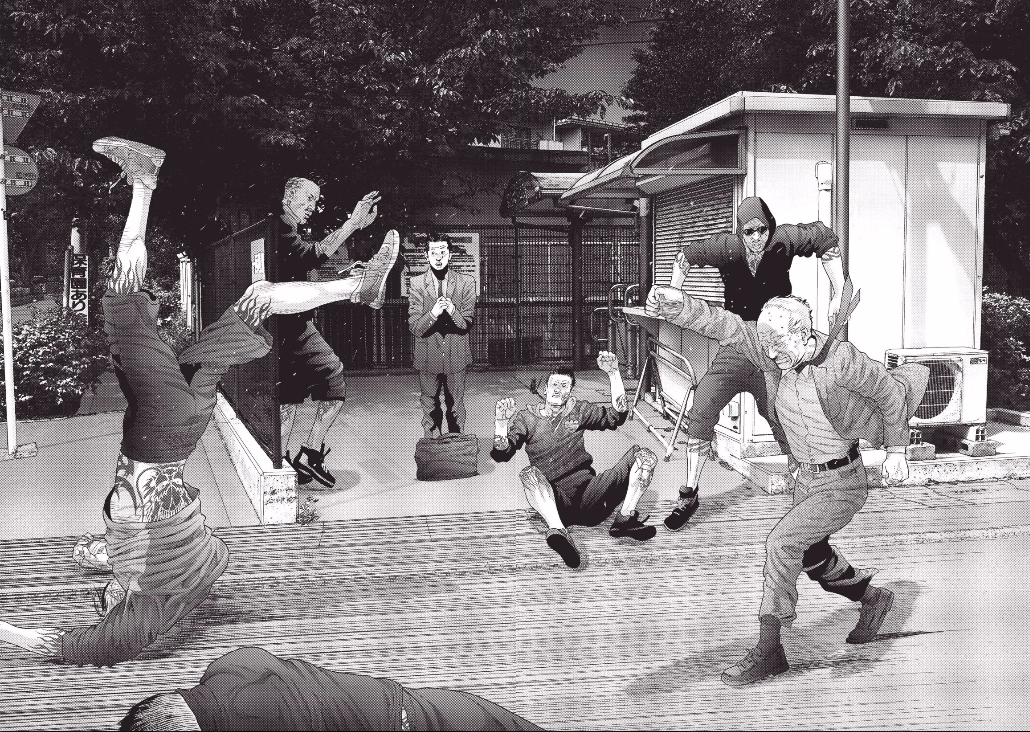 Tamura: Why did you name this series Inuyashiki?

Oku: In Japan, there are people with the last name “Nekoyashiki [literally, “cat mansion”], but not “Inuyashiki” [“dog mansion”]. So my hope was this manga would come up first when someone searched for it on a search engine. Especially spelled out in hiragana, it’s hard to tell what this manga is about. I didn’t want to make an “obviously cool manga” right after doing GANTZ. I wanted to make it ambiguous, so people would wonder, “What’s this about?” Also I’m a huge dog lover. [laughs]

Shiota: Initially Oku-sensei speculated, “It’s unlikely there will be an anime adaptation offer for Inuyashiki because the main character is an old man.” But in reality, we got the offer rather early in the series for both the anime and live-action movie.

Oku: Yes, I remember saying, “Don’t expect any offers for any kind of adaptations for this series.” [laughs] But surprisingly there was an offer for the anime at an earlier stage than there was for GANTZ.

Tamura: I had a strong impression when I first met the production team for the Inuyashiki anime that they were really into reading the manga, that they each shared their own understanding of it and collaborated with each other in order to make the anime series.

Oku: I’m looking forward to seeing both the anime and the live-action film that are coming out next year.

Shiota: From the beginning Oku-sensei claimed “Inuyashiki will conclude in ten volumes.” And just as you’ve said, the final, tenth volume is coming out. [The English edition releases on December 19, 2017]

Oku: The serialization went smoothly, so luckily I got it complete within ten volumes.

Shiota: As Oku-sensei said, “These ten volumes will be the equivalent of one movie.” If you haven’t started reading the series yet, I’d recommend reading them all in one sitting! [laughs] 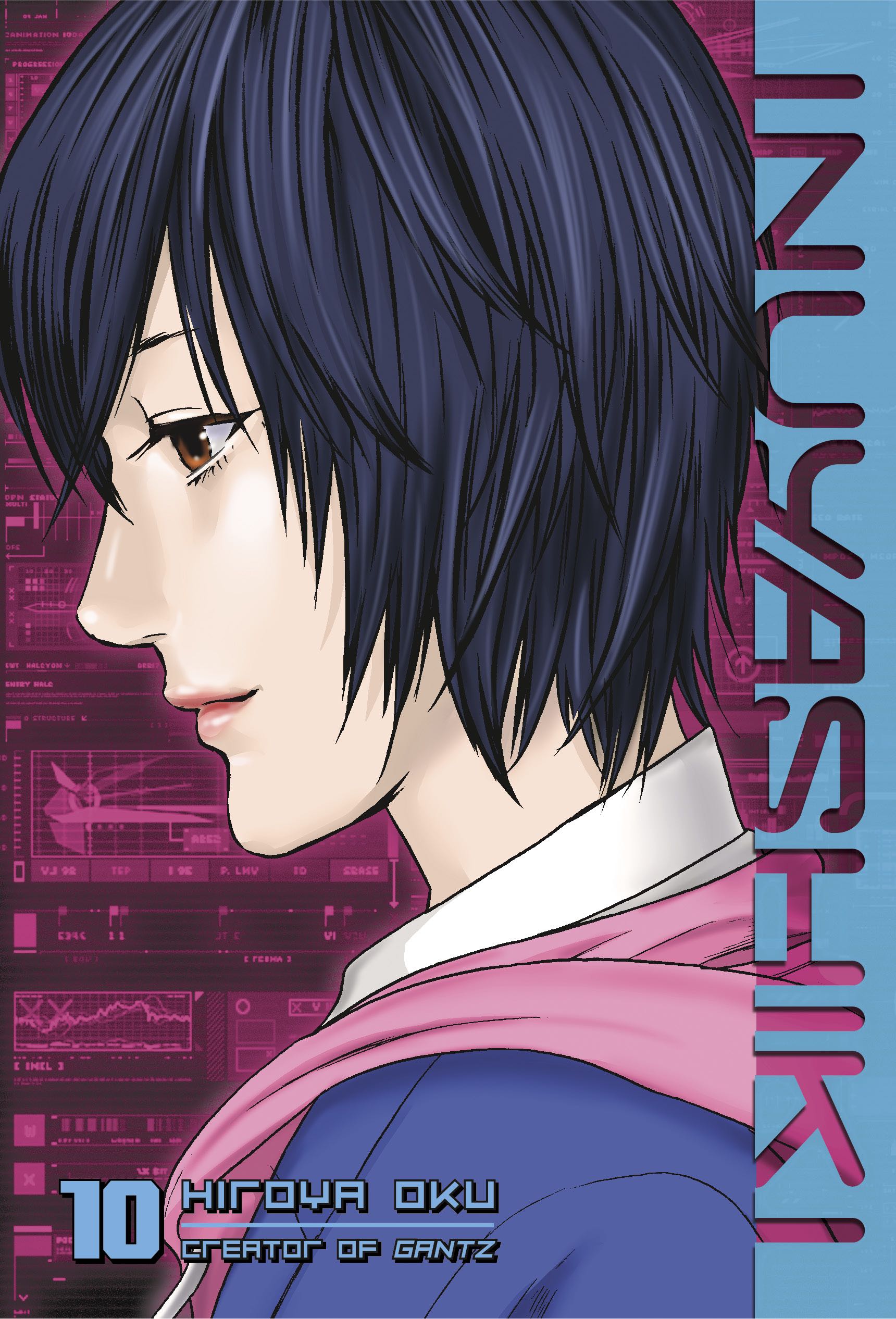 The final volume of Inuyashiki is coming soon on December 19, 2017. Pre-order now!

Shiota: Is it true you’ve watched movies every day ever since you were a teenager?

Oku: Yes, I watch a movie every day still to this day.

Tamura: What have you watched recently?

Oku: The other day, I watch Alien: Covenant. It was pretty good.

Shiota: It’s not even for the sake of making manga, you seem to simply just enjoy it. And if you don’t, you just fall asleep. [laughs]

Shiota: I remember Oku-sensei saying, “I want to convey my stories through manga.” Your art as well as production skill is amazing, but these are all just tools for storytelling. What do you consider a good story in a manga?

Oku: Hm … It’s not about whether if it’s a “good story” or not, but rather about my own taste. I really like entertainment in general, so I like stories where the objective of the protagonist is apparent from the first episode. I like those stories that give me the anticipation for the main character to thrive in a fictional world, that makes me want to find out what happens next.

Tamura: In Inuyashiki, you’ve portrayed the world of the internet rather realistically.

Oku: A part of me has always wanted to portray whatever is happening in the world that I live in. I’ve been consistently endorsing reality and real-life events ever since I started working on GANTZ.

Oku: Seinen manga magazines, as the name suggests, are for mature audiences. So they’re a platform on which I can draw what I enjoy as an adult. It’s targeting adults, not children. There’s a wider range of freedom for what I can express. 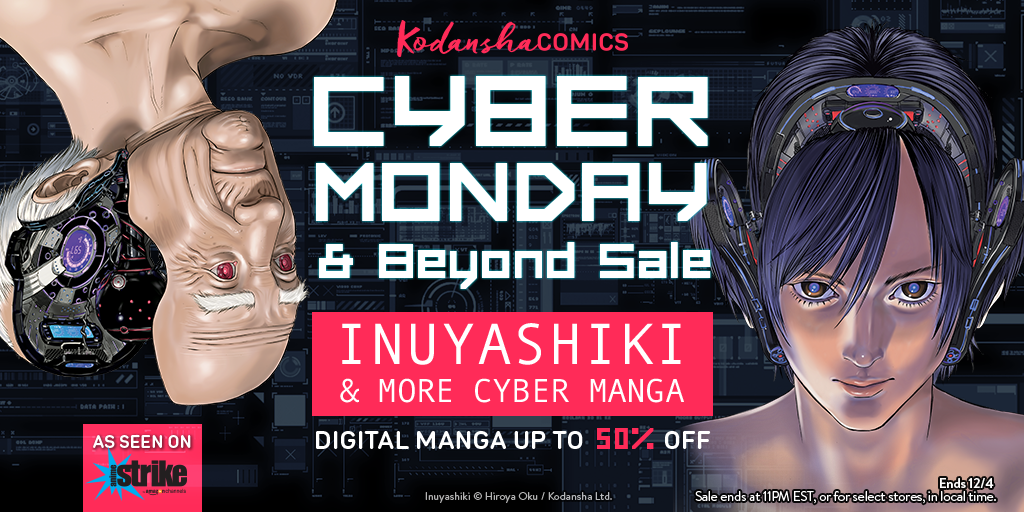