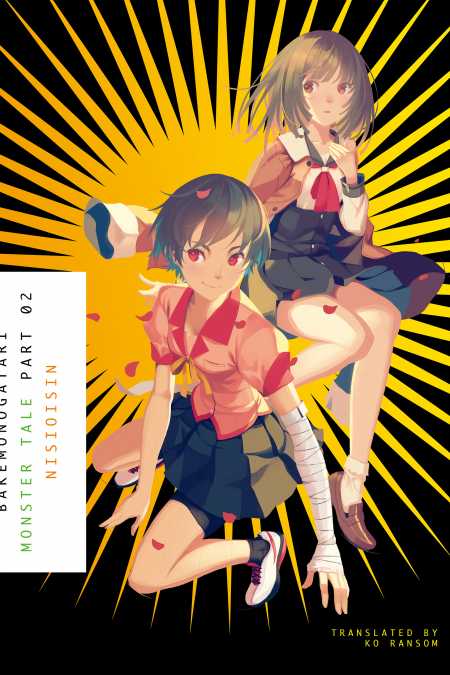 Bakemono, literally “altered thing,” which translates as “monster.” Monogatari, literally “thing narrated,” which translates as “tale.” Combined into a neologism by he of the reversible nom de plume, they yield BAKEMONOGATARI, the monster tale that kicked off a series whose anime adaptations have enjoyed international popularity and critical acclaim. A self-described loser, Koyomi Araragi is struggling at a prep school that he should never have gotten into. He has all but quit caring, but as a senior, he faces the chilling scenario of not being able to graduate. It’s time to cram, but the supernatural aberrations that keep on popping up in his provincial town won’t let him be. Previously, our hero turned into a vampire and back, gained an acid-tongued girlfriend, and couldn’t find his way home thanks to a lost child. In this second of three parts, which introduces Suruga Kanbaru and Nadeko Sengoku, he becomes embroiled in a case that riffs on a classic English story from 1902.