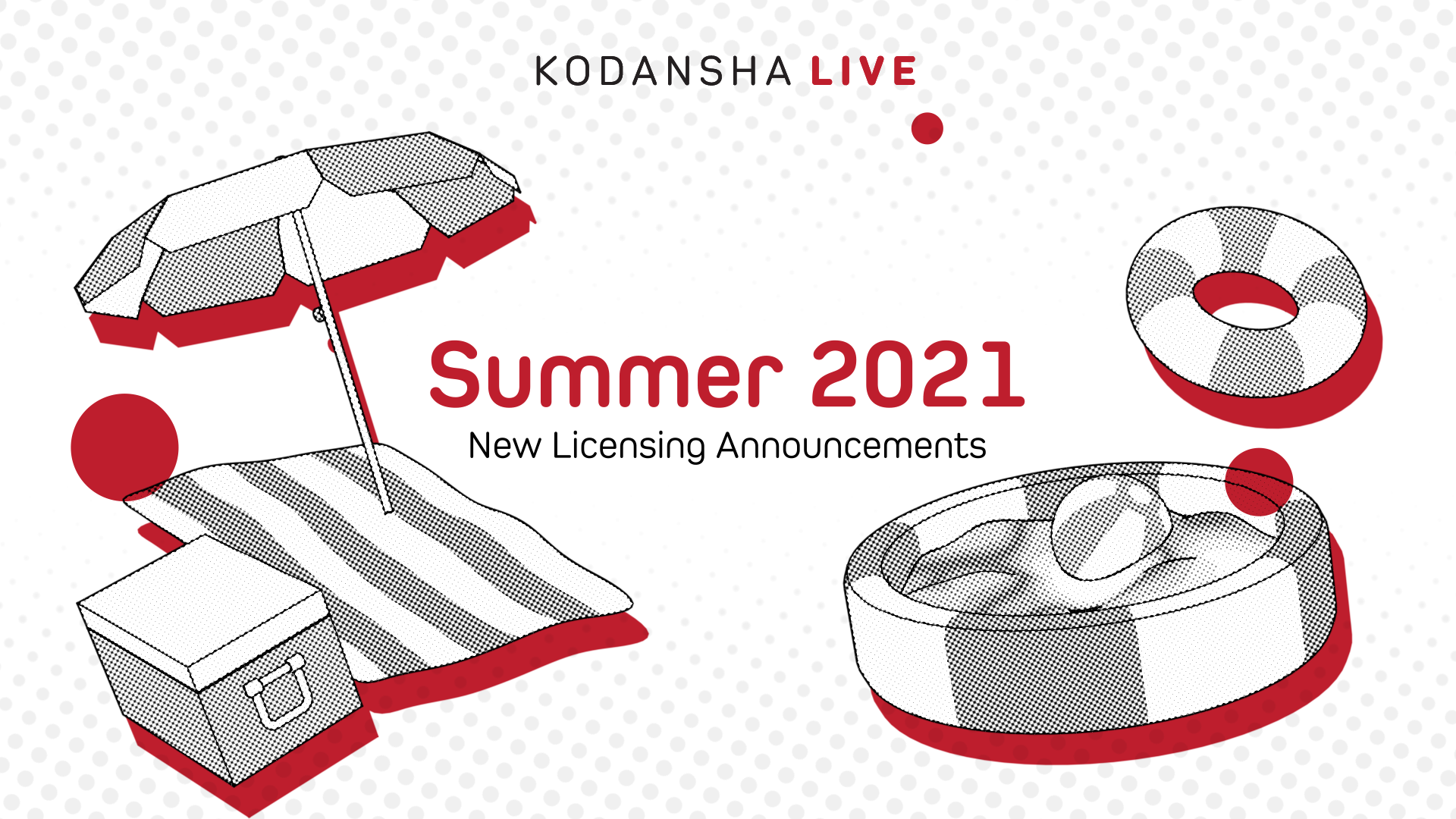 See the summer fun coming from Kodansha Comics in 2021!

We know it’s starting to get chilly but we’re asking you to look ahead to the warm sunny future of Summer 2021! You might’ve caught the our announcement for these amazing new series and new editions of manga on our the Kodansha Live for Wednesday, November 11, but just in case you hadn’t seen we’ve collected all the info shared below! Take a look into the future with our Summer 2021 new licensing line-up!: 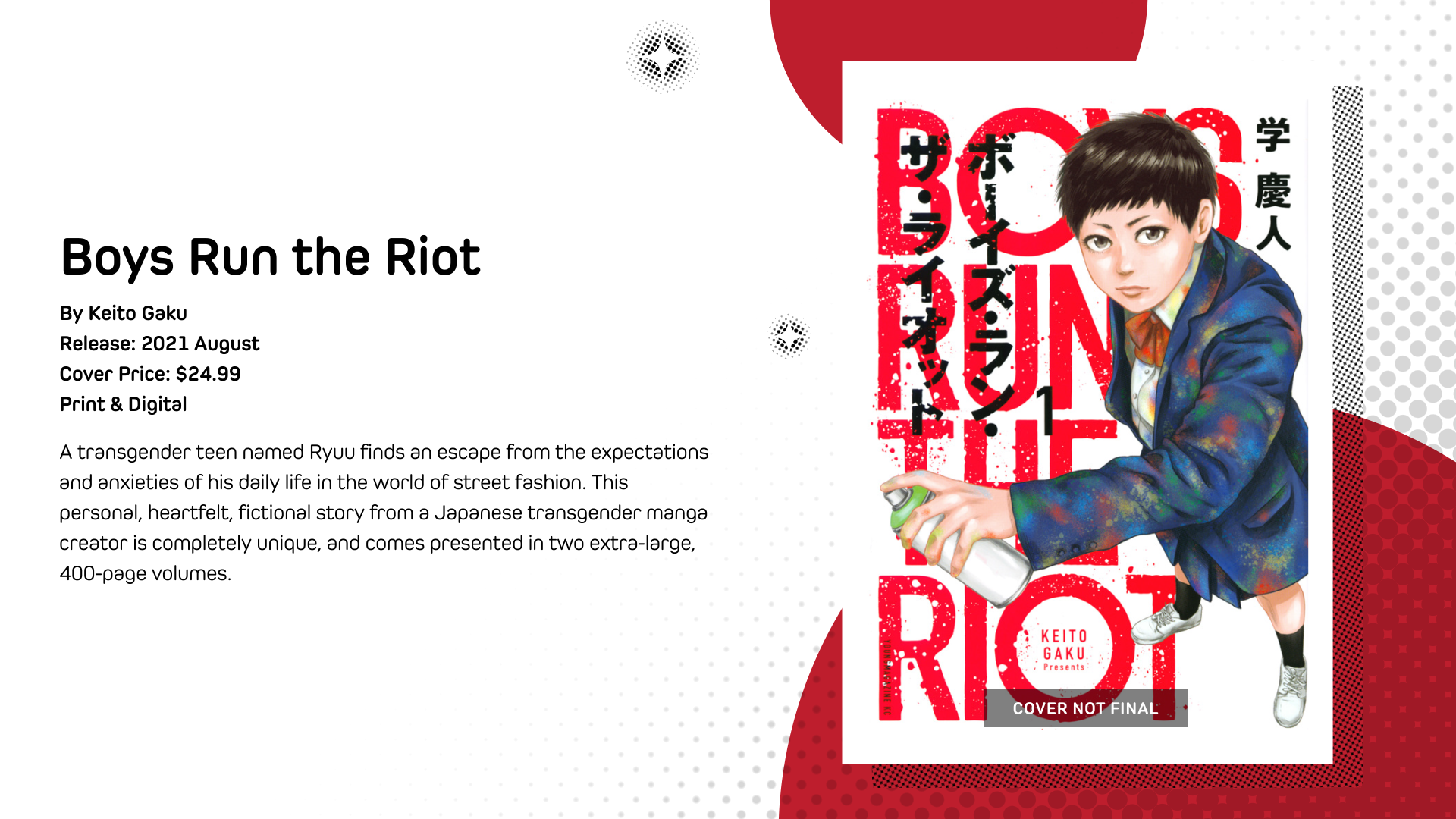 Boys Run the Riot by Keito Gaku
A transgender teen named Ryuu finds an escape from the expectations and anxieties of his daily life in the world of street fashion. This personal, heartfelt, fictional story from a Japanese transgender manga creator is completely unique.

High schooler Ryuu knows he’s transgender. But he doesn’t have anyone to confide in about the confusion he feels. He can’t tell his best friend, who he’s secretly got a crush on, and he can’t tell his mom, who’s constantly asking why Ryuu is always “dressing like a boy.” He certainly can’t tell Jin, the new transfer student who looks like just another bully. The only time Ryuu feels at ease is when he’s wearing his favorite clothes. Then, and only then, the world melts away, and he can be his true self. One day, while out shopping, Ryuu sees an unexpected sight: Jin. The kid who looked so tough in class is shopping for the same clothes that Ryuu loves. And Jin offers Ryuu a proposal: to start their own brand and create apparel to help everyone feel comfortable in their skin. At last, Ryuu has someone he can open up to–and the journey ahead might finally give him a way to express himself to everyone else. 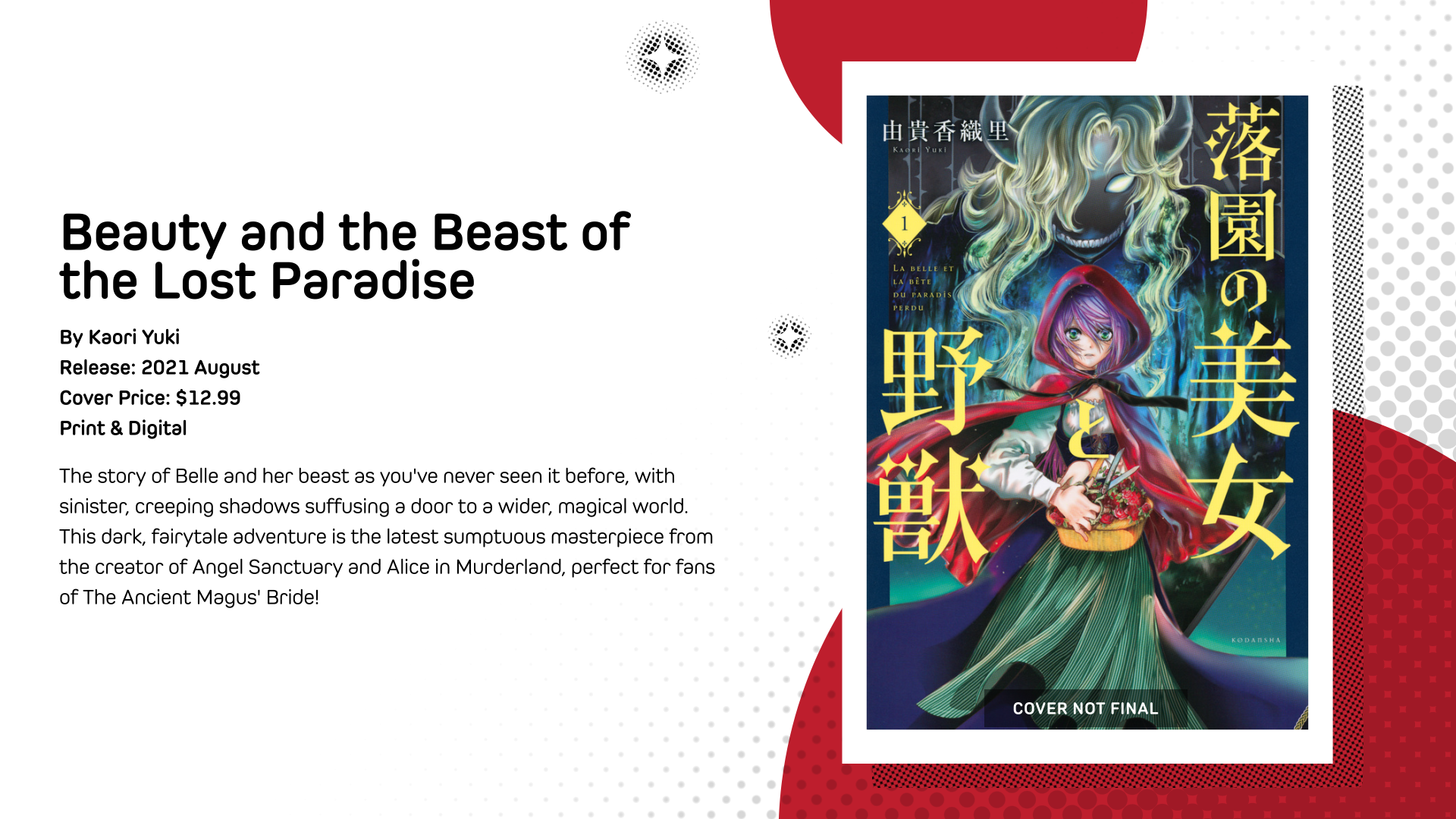 Beauty and the Beast of the Lost Paradise by Kaori Yuki
The story of Belle and her beast as you’ve never seen it before, with sinister, creeping shadows suffusing a door to a wider, magical world. This dark, fairytale adventure is the latest sumptuous masterpiece from the creator of Angel Sanctuary and Alice in Murderland, perfect for fans of The Ancient Magus’ Bride!

Young and rambunctious Belle insists on going out to play in the forbidden woods, but her adventurous streak abruptly ends when her mother is spirited away by a beast known to kidnap beautiful women. Twisted by the loss of his wife, Belle’s father keeps his daughter, who has unusual, violet hair, locked away in an effort to “protect” her from prying eyes. Finally emerging after years of solitude, Belle ventures back into the woods where she lost her mother and encounters the beast once more… 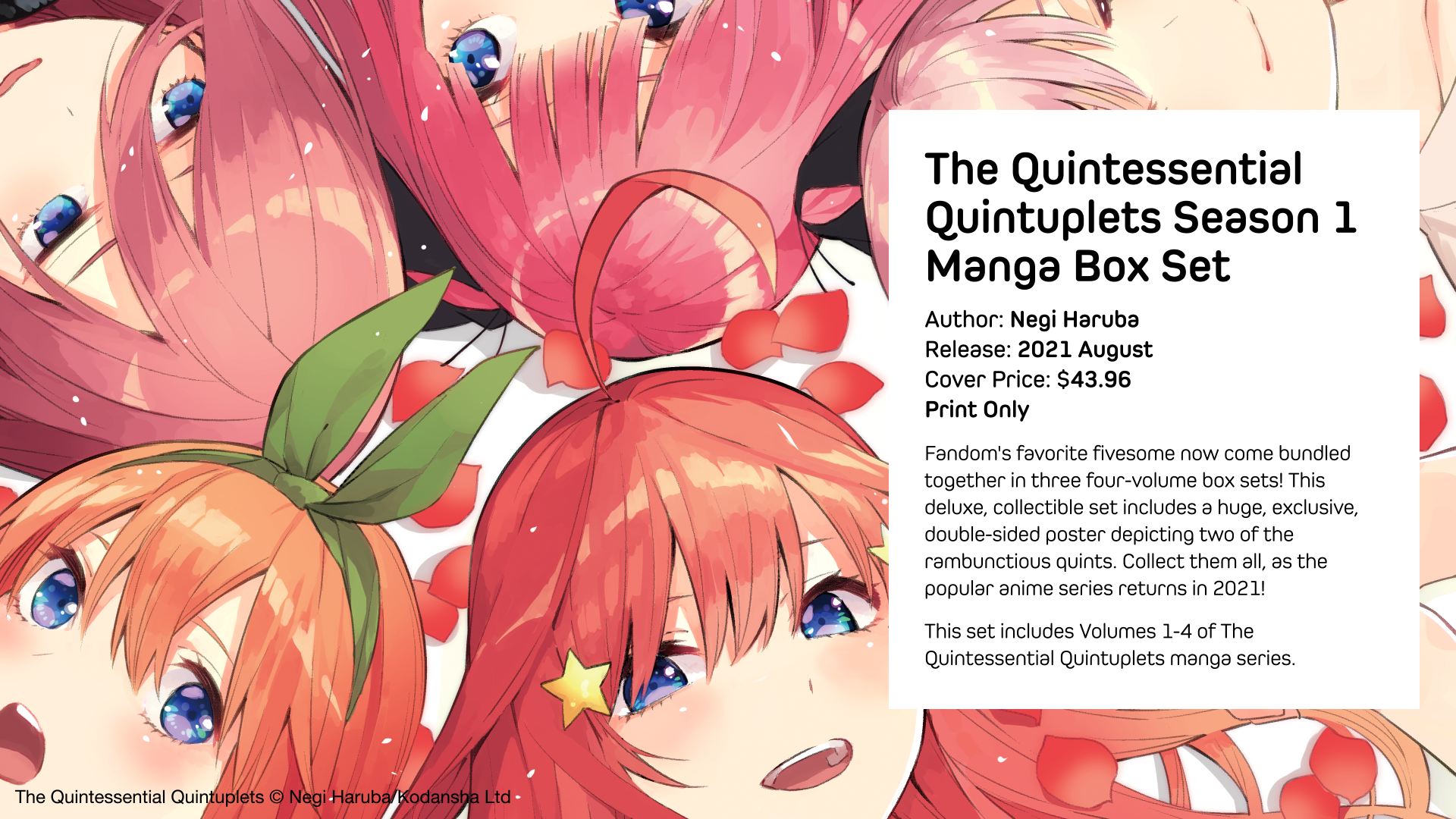 This set includes Vol. 1-4 of The Quintessential Quintuplets manga series.

Five girls who want to do anything but study, and their tutor: A high school boy who’s got book smarts and not much else. Futaro Uesugi took the tutoring gig because he was desperate for cash, but when his students–the five beautiful daughters of a wealthy businessman–find five times the excuses to slack off, what can he do?! At this rate, the sisters won’t graduate, so if he wants to get paid, Futaro must think of a plan to suit each of them… Which feels hopeless when five out of five of them think he’s a loser! 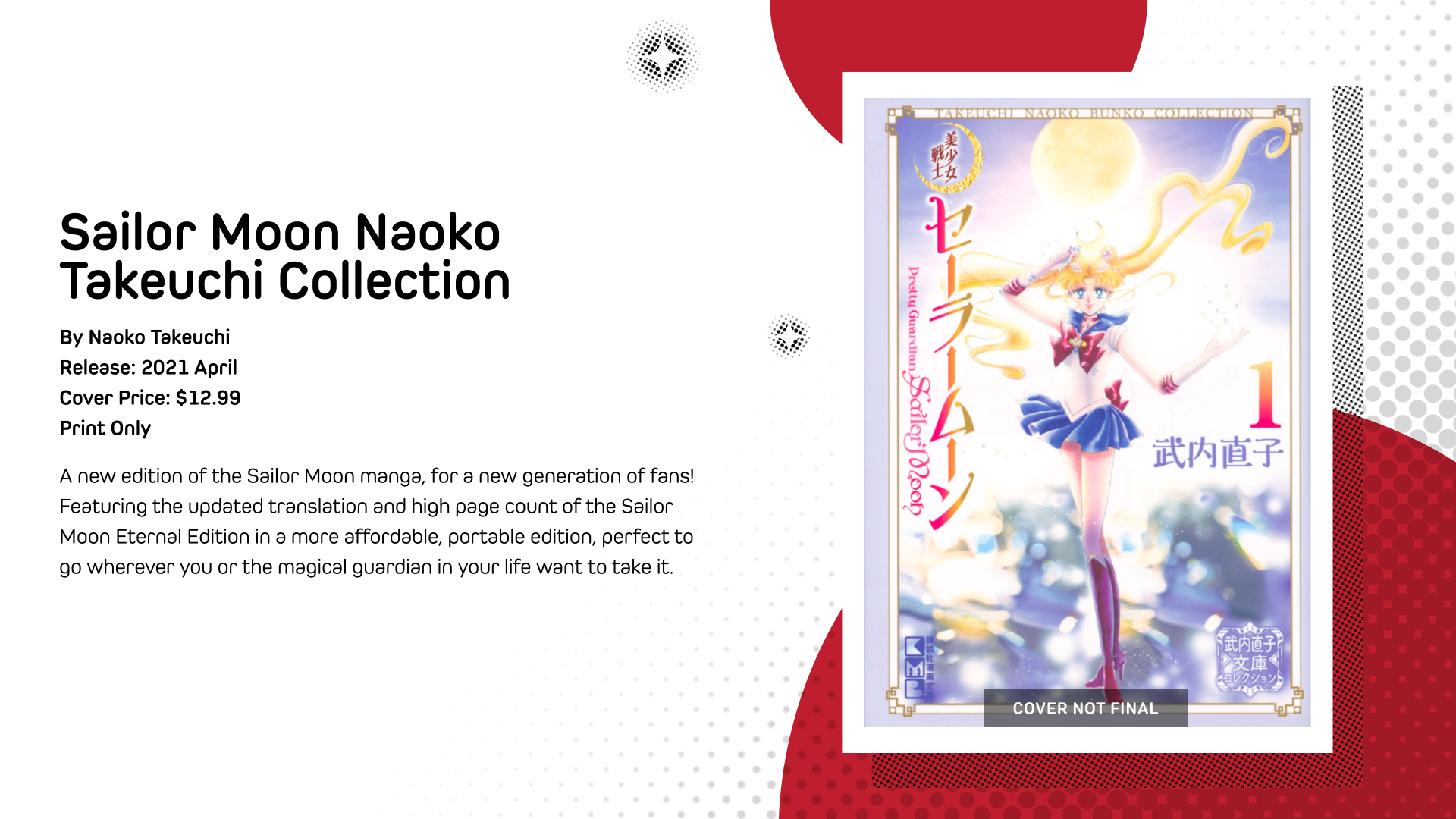 Teenager Usagi is not the best athlete, she’s never gotten good grades, and, well, she’s a bit of a crybaby. But when she meets a talking cat, she begins a journey that will teach her she has a well of great strength just beneath the surface and the heart to inspire and stand up for her friends as Sailor Moon! The original Sailor Moon in a new, affordable edition. 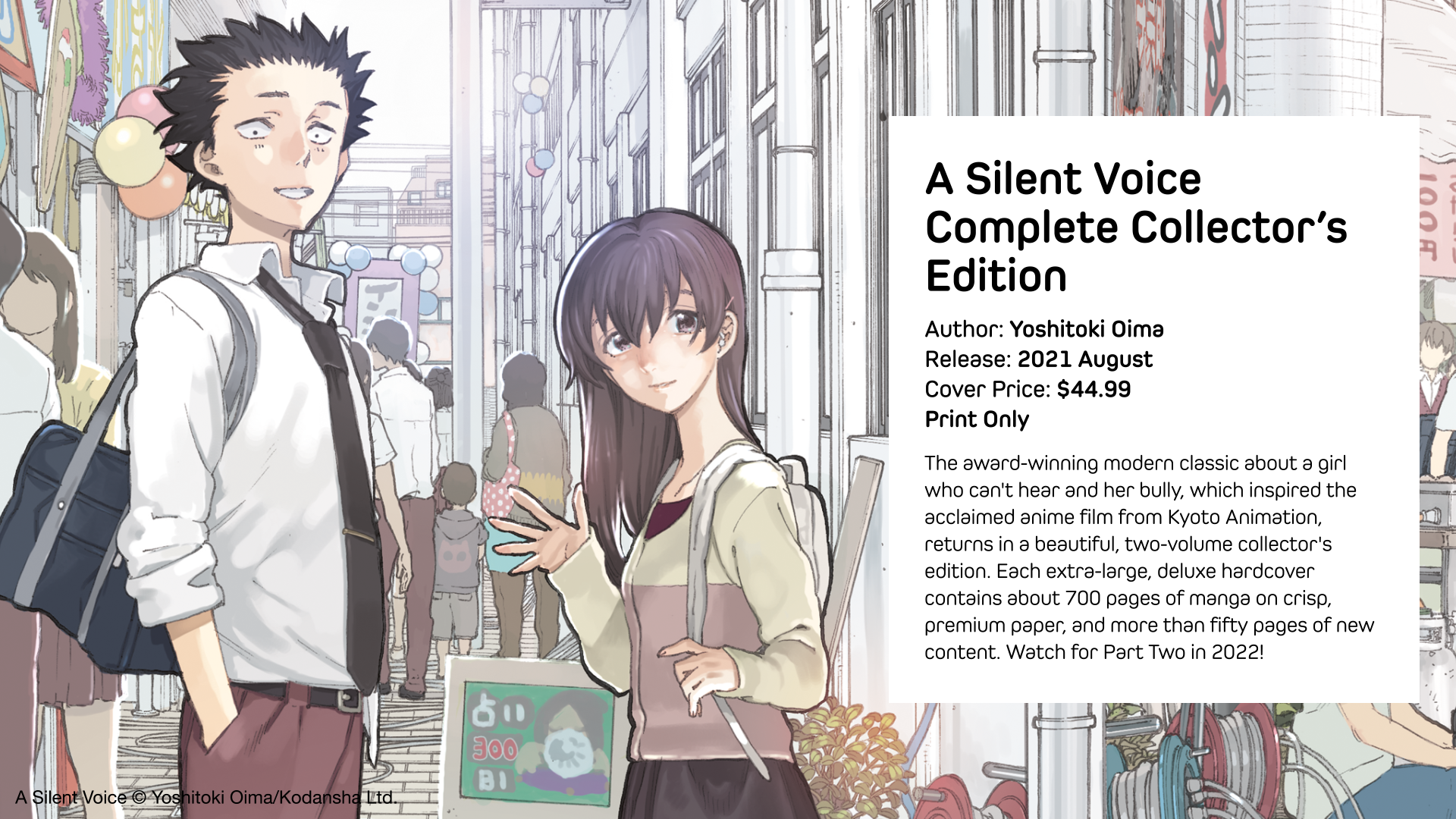 A Silent Voice Complete Collector’s Edition 1 by Yoshitoki Oima
The award-winning modern classic about a girl who can’t hear and her bully, which inspired the acclaimed anime film from Kyoto Animation, returns in a beautiful, two-volume collector’s edition. Each extra-large, deluxe hardcover contains about 700 pages of manga on crisp, premium paper, and more than fifty pages of new content. Watch for Part Two in 2022!

“A Silent Voice isn’t just a potential conversation starter about bullying, it also teaches empathy and has the potential to change behavior.” -School Library Journal

“A very rare chance to see characters with disabilities represented on the page and a harsh light shed on the way that Japanese culture handles this difficult topic.” -Comics Bulletin

This deluxe, large-sized hardcover includes the first half of the story of A Silent Voice, extending from Vol. 1 through half of Vol. 4, as well as over fifty pages of content never published in English before, such as the early drafts of the story, behind-the-scenes details from creator Yoshitoki Oima, and color art and concept sketch galleries. Collectors and new readers alike won’t want to miss it! 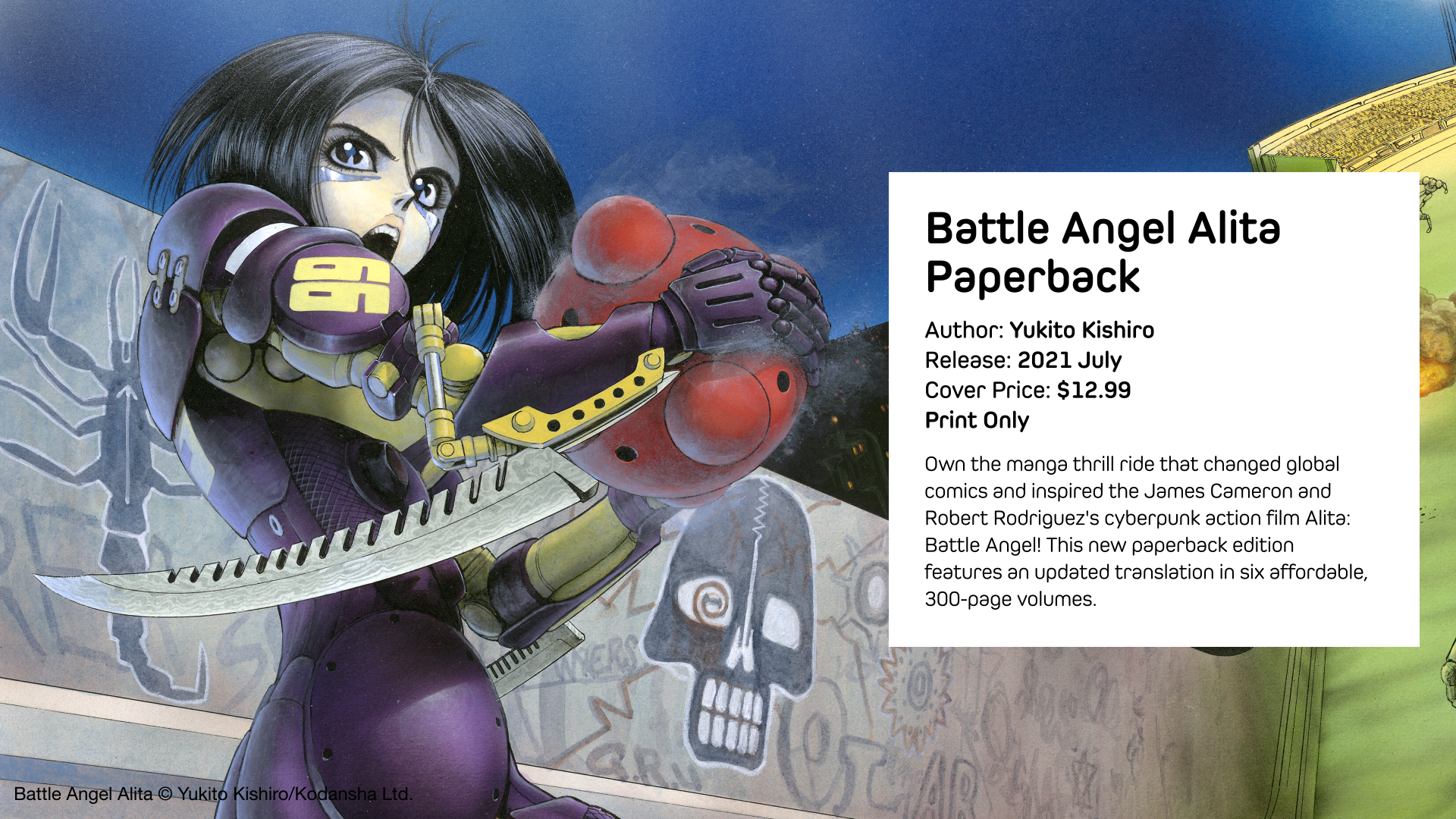 In a dump in the lawless settlement of Scrapyard, far beneath the mysterious space city of Zalem, disgraced cyber-doctor Daisuke Ido makes a strange find: the detached head of a cyborg woman who has lost all her memories. He names her Alita and equips her with a powerful new body, the Berserker. While Alita remembers no details of her former life, a moment of desperation reawakens in her nerves the legendary school of martial arts known as Panzer Kunst. In a place where there is no justice but what people make for themselves, Alita decides to become a hunter-killer, tracking down and taking out those who prey on the weak. But can she hold onto her humanity as she begins to revel in her own bloodlust?