If you’re a fan of the anime streaming service HIDIVE and have been using them for your anime needs have we got a deal for you! For a limited time we’re featuring Kodansha Comics & VERTICAL manga that inspired some of HIDIVE’s fan-favorite anime in one great sale no manga or anime fan can miss.

That’s right until 6/29 you can take up to 50% off such manga series as the coming of age romantic comedy O’ Maidens in Your Savage Youth, the slice of life astronaut drama Space Brothers, the steamy love-triangle saga Domestic Girlfriend, and more!

Just visit one of our participating digital vendors to save up to 50% off select Kodansha Comics & VERTICAL manga: BookWalker, comiXology, Google Play, Kindle, Nook and izneo. Sale runs from June 23, until June 29!

~HIDIVE Fan Digital Manga Sales! ~
June 23 – 29
See below for the full list of titles being offered during this sale,
and click on the links below to read chapter 1s FREE! 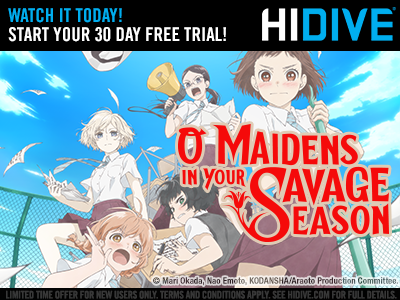 Want to give HIDIVE a try?
Start watching with your 30-day free trial!