Skip to content
Home > News > event > Full Q&A with The Drops of God creators + info on their appearance in Napa/L.A. Oct 20-21 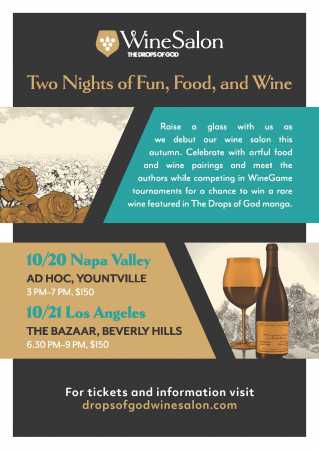 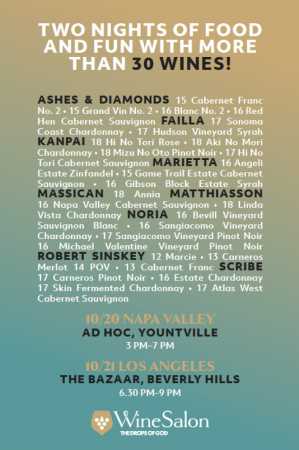 Meet the creators of The Drops of God in Napa or L.A. + read the full exclusive Q&A below!

Connosseiurs of fine wine and fine manga have all heard about the big announcement this week of our co-publication of The Drops of God with comiXology Originals.

The rare pair of personal appearances take place in two California locations: Napa Valley (where else?) and Beverly Hills. These are fine wine and dining affairs where guests will be able to taste through 30 different wines from 9 different producers personally chosen by them, and which will be paired with the cuisine of Thomas Keller’s Ad Hoc at Yountville in Napa Valley on October 20th and the legendary tapas of The Bazaar by Jose Andres in Beverly Hills on October 21st. To learn more about these events and The Drops of God Wine Salon, please visit http://dropsofgodwinesalon.com.

You can read the thoughtful, often poetic, replies by the Kibayashis in this exclusive full Q&A below. Portions of this interview first appeared in the Drops of God publication announcement that ran in Wine Spectator‘s Unfiltered column. Thank you to Ben O’Donnell.

What was the inspiration for the original story, and how did you come up with different storylines during the decade of publication?

We got hooked on wine long before we began serializing The Drops of God. We were at a DRC [Domaine de la Romanée-Conti] event and happened to taste the ’85 Echezeaux.

When we tasted it, it was in its peak state, the perfect time to open the bottle. Tasting it changed our view of alcoholic drinks and later changed our lives. We experienced this as if we were struck by lightning; a picture scroll of the history, people, and culture behind that one bottle of wine revealed itself before us. We remember that shocking moment even today.

This was what got us into the world of wine, and as we drank wine every day, we started talking about the story behind each wine and what we imagined it to be. This process came naturally to us, probably because of our profession as manga writers.

“This wine is a woman.” “Yes, this must be a glamorous woman with long, dark hair … ” We discussed how we imagined the wines we drank like that, without conflicting opinions.

Wine is actually a beverage that has its own worldview, and we felt as if we were taking a peek into that view by drinking it. That’s probably why a lot of images from around the world came to our minds. We decided to visualize these images through dramatic sequences, in the form of a manga. And that’s how the story of The Drops of God gradually started.

How did you choose the wines in the story? (And the food pairings in the “Marriage” series?) How did your wine knowledge evolve during the years you wrote the series?

Every single wine introduced in the manga was tasted by us, and they had to pass a certain standard.

We tasted various kinds of wine at all price ranges and from different parts of the world, even ones that don’t appear in the manga. We screened out wines we thought readers would be disappointed in, regardless of price. We didn’t want to introduce wines we personally found unattractive. At the same time, we didn’t want to say anything negative or blasphemous about wines that would appear in the manga.

Regarding food, as it’s depicted in our Marriage—The Drops of God Final Arc, it can’t be separated from wine. There are combinations that complement each other and that work against each other. To find an exquisite food pairing, rather than focusing in on certain ingredients, we instead spent our time in our kitchen and at restaurants just trying out different ingredients from Japanese, Chinese, and Western cuisines in order to find out what pairs best with them, more like trial-and-error experimentation.

Regarding our knowledge about wine, the biggest change that The Drop of God serialization brought us was the fact that we started drinking wine “globally.” Before The Drops of God we drank wine mostly from France, and occasionally from the U.S., and sometimes from Italy, and that was about it. However, we started encountering wines from around the world, from Spain, South Africa, Australia, Germany, Greece, Switzerland, Moldova, China … Just like what the main characters did to find the Drops of God and the Twelve Apostles. Wine mirrors a country’s food culture and lifestyle. It’s very fascinating. We wouldn’t have realized this if it wasn’t for The Drops of God.

Why do you think The Drops of God has been such a huge success that has resonated with so many people, especially young people? How do you think it has influenced wine culture?

A lot of young people haven’t experienced wine or know much about wine. For them, wine is a beverage that presents hurdles.

But in The Drops of God, the main character has no knowledge of wine. He starts tasting wine one by one and starts out with expressions like, “This is a very good wine. It’s like the song by Queen.” Wouldn’t you be tempted to taste the exact same wine and experience that? If you could taste and feel it coming to you like music, that should be enough to enjoy it, shouldn’t it? “It isn’t so difficult for us to enjoy wine” is probably what young people realized by following the main character.

The influence of The Drops of God on wine has spread around the world in a way that we, the story writers of the manga, never thought would happen.

Soon after the serialization started, The Drops of God became something of a cultural phenomenon in South Korea. This was around 2005, right when the Korean won was getting stronger and the economy was improving. Wine has links to social well-being, and maybe for that reason, we heard of situations where elite companies bought all the wines introduced in The Drops of God as a way to “educate” their employees.

Back then, most of the wines sold in South Korea were Chilean, due to lower import taxes, but now people can enjoy wines from countries like the U.S., Spain, and France, and the culture of wine has penetrated into that country.

The most surprising phenomenon happened in France. We assumed that The Drops of God wouldn’t be accepted in France, but the result was the complete opposite. French readers were able to rediscover their wine culture by reading The Drops of God, and that strange phenomenon helped maintain young people’s interest in wine. The French government acknowledged that contribution, and we were presented with two awards, Ordre du Mérite agricole in 2011, and L’Ordre des Arts et des Lettres in 2018.

In Japan, the wines that were introduced as “as seen in The Drops of God!” sold out immediately. The top-selling merchandise on Rakuten [the major online shopping site in Japan] we’ve heard is wine, and we’re sure that The Drops of God has something to do with it.

What is your hope for introducing The Drops of God to an English-speaking audience?

Of course we’re very happy! English is the largest spoken language in the world, and there are many wine-producing and wine-loving countries that have English as their primary language, such as Australia, New Zealand, South Africa, and, obviously, the U.S.

We’ve been receiving inquiries from fans from those countries about when the English edition will come out. British people are connoisseurs of French wine, of course, and they must have been waiting for an English edition to come out, too.

What is your idea behind the Drops of God Wine Salon and WineGame app?

Wine is a luxury item, and it’s something that should be introduced based on one’s preferences in taste, but consultation is the most difficult part of wine selection. That may be the reason why general audiences get easily discouraged from exploring further.

Through this Wine Salon and game, we wanted to learn more about an individual’s taste, to customize and introduce wine to people in a more enjoyable way. We also wish to find new needs of wine with the data that will be collected through this game.