We are super excited to be at Anime NYC this year,  because we’re hosting a very special guest—VOFAN, star illustrator of NISIOISIN’s MONOGATARI series, the bestselling light novels from Vertical! To celebrate his rare appearance in America, and also debut his new art book Colorful Dreams, we’ll have a special art exhibit, autograph sessions, panels, and lots of fun activities! Here’s the rundown of all things related to VOFAN at Anime NYC 2019: 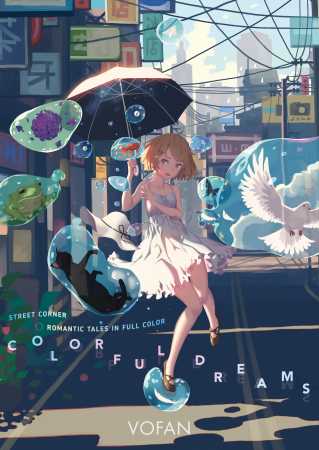 Colorful Dreams will be available from Vertical October 29, 2019!

Colorful Dreams is VOFAN’s first art book to be published in the U.S. and a collection of his best personal works in full-color. Leading up to its release, VOFAN reimagined and remastered the edition that was published in Taiwan over a decade ago with brand-new cover art, photos, and illustrations.  To showcase VOFAN’s journey to refine his art style, Vertical is honored to bring a special art exhibit to Anime NYC featuring his process works from Colorful Dreams, as well as the MONOGATARI series and other commercial works. 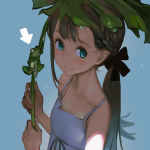 VOFAN is a Taiwanese illustrator. He has been the cover illustrator for video game magazine Famitsu Weekly Taiwan since 2004 and served as the head of character design for the PS3 game Time and Eternity. Since 2006, he has been the cover illustrator for the Monogatari light novel series as well as for the mystery series The Forgetful Detective, both written by NISIOISIN. He also illustrates PlayStation Network Taiwan’s virtual avatar AI-Chan. As a photographer, he sometimes combines photographs with illustrations in his work. His other publications include the COLORFUL DREAMS series of illustrations and poems and the album series VOFAN OTONA FANTASY. 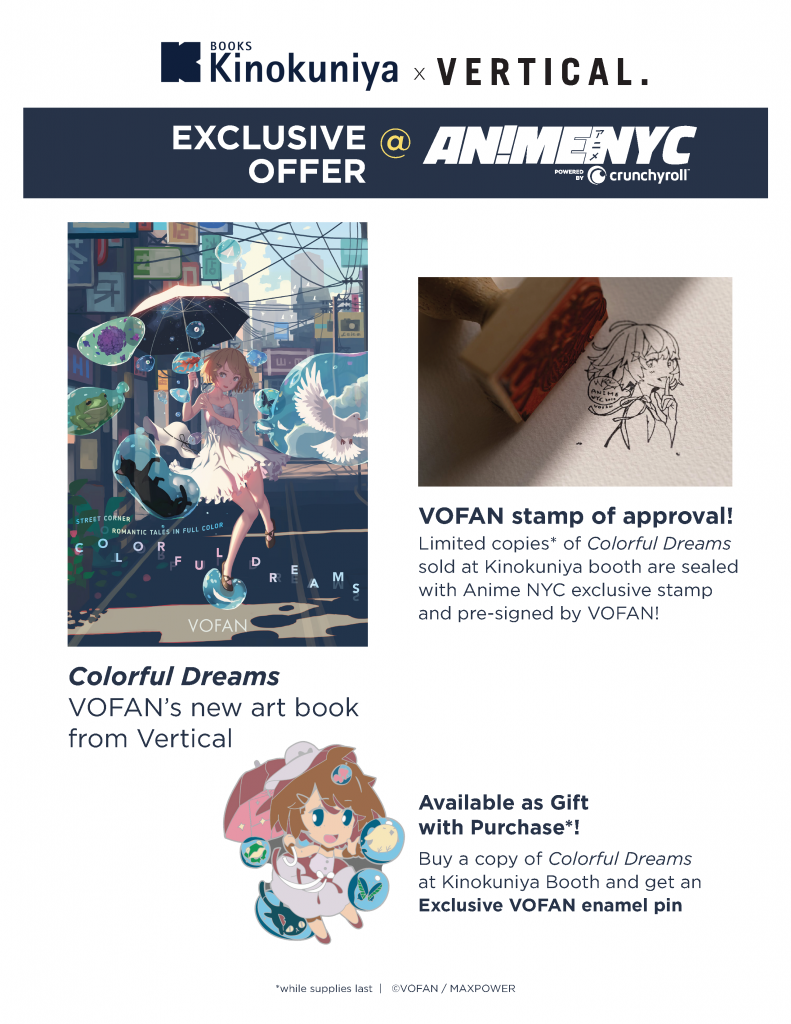 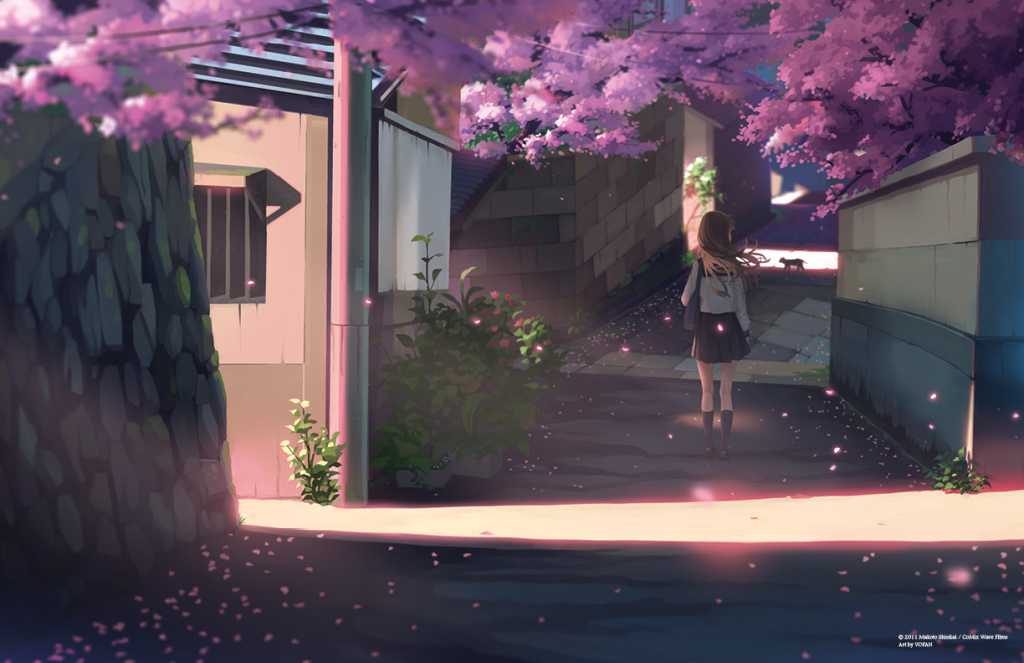 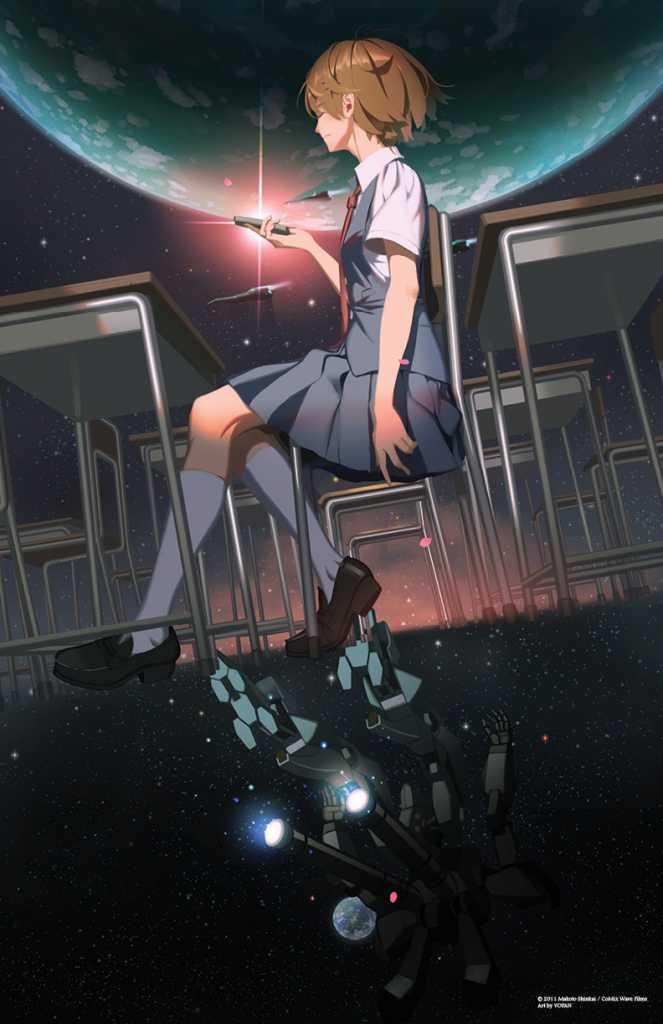 The cover art from these two novels based on the films of anime maestro Makoto Shinkai (Your Name) were specially drawn by MONOGATARI Illustrator VOFAN, and to commemorate his appearance at Anime NYC, these beautifully drawn pieces will be printed into full-size posters! A limited number of poster sets will only be available at Animate USA (booth #1523), so don’t miss your opportunity to grab yours!

The two amazing love stories, 5 Centimeters per Second: one more side and Voices of a Distant Star: Words of Love/Across the Sky, are now on sale at your favorite bookstore!

Don’t miss the chance to meet and get an autograph from VOFAN! He will be signing autographs on Saturday, November 16 and Sunday, November 17 at the Vertical Booth (#1617) at Anime NYC (Javits Convention Center, New York) . 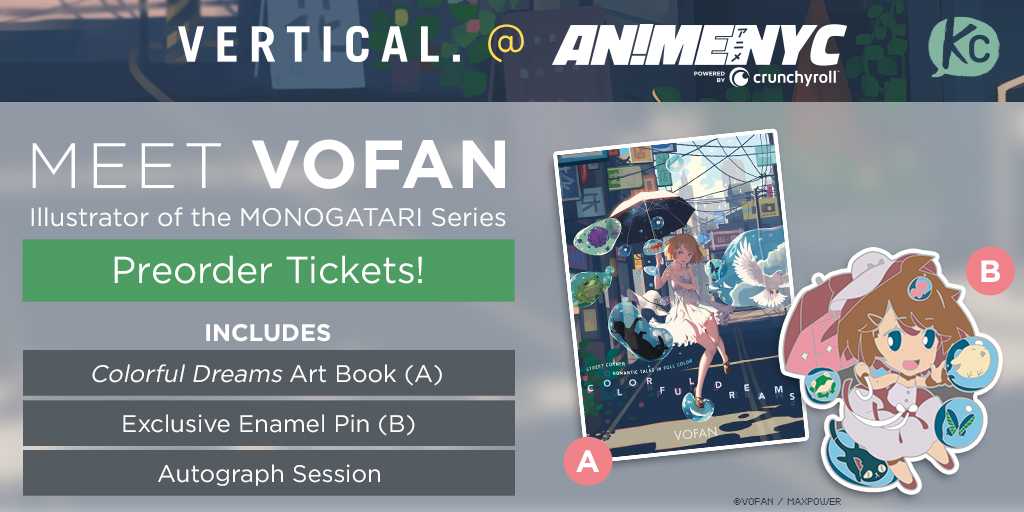 The VOFAN Premium Package is $25 and includes:

ICYMI we announced our MONOGATARI Contests leading up to Anime NYC! Between now and November 17, 2019, we are accepting online submissions for fan art and cosplay.

But if you’regoing to Anime NYC, you are in luck! Because there’s a special category for the onsite cosplay contest, and VOFAN himself will be there as a judge! So cosplay as one of many unique MONOGATARI characters and swing by the Vertical Booth (#1617) on Sunday, November 17 at noon! … more details. 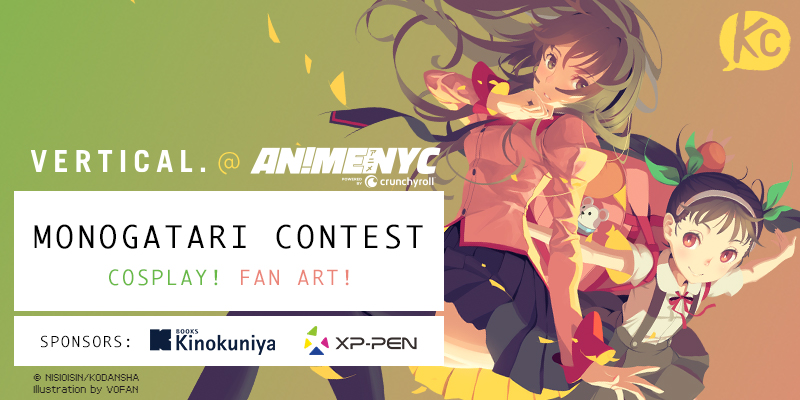 If you’re in New York City the month of November, believe your eyes! You will find a massive Attack on Titan mural produced by Colossal Media near Madison Square Garden, on 31st Street between 7th and 8th Avenues.

And to celebrate it, Kodansha Comics—along with our pals at Anime NYC, Funimation, and Kinokuniya—will be hosting a photo contest from early November to mid December 2019. Here’s what to do:

Just take a photo in front of the mural, tag us #AOTinNYC and #AnimeNYC! Winners will get awesome prizes from all of us! …Read More 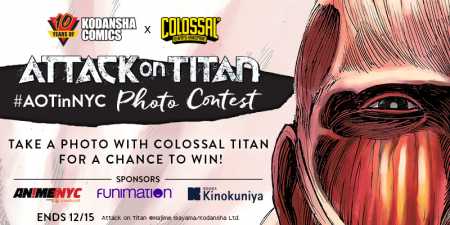 This is it! Just in time for VOFAN’s visit to Anime NYC arrives … the MONOGATARI Humble Bundle, our longest-running Humble Book Bundle ever, running for an epic 3 weeks! It’s the ultimate NISIOISIN digital package of light novels, manga, art, and audiobooks—and a perfect gateway to this author’s unique world. (And if you’re at Anime NYC, let the star illustrator of all those beautiful MONOGATARI covers, VOFAN, know you supported his Humble Bundle!)

It’s a multisensory feast for the eyes (with manga by Mitsuru Hattori and Oh!great and an artbook by VOFAN) and ears (with two audiobooks featuring the talents of your favorite anime voice actors)!

And you pay what you want for it—helping out charity while you’re at it! What could be better?

Ready? So how does it work? … more details

Celebrate the launch of VOFAN’s new art book Colorful Dreams with the artist himself! Appraised by the fans around the world as “The Magician of Light from Taiwan”, VOFAN (the star illustrator of the Monogatari Series novels by NISIOISIN) and publisher Vertical will draw back the curtain on how the project came to be — and check out some beautiful illustrations from the art book.

A new decade brings a new age of exciting manga, so be among the first to hear all about it! Kodansha Comics and Vertical Comics proclaim the conquest of Madison Square Garden by the Colossus Titan from Attack on Titan, announce their brand-new print and digital licenses, and answer your questions, with a special guest editor from Japan to give an insider’s look at how your favorite shojo and josei manga are born. Best of all, every attendee will receive a free 200-page manga paperback, and a lucky few will receive Kodansha Comics 10-year anniversary pins and other cool stuff!