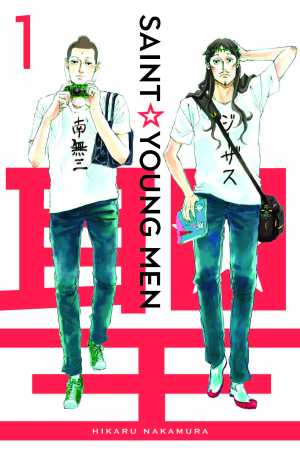 Volume 1 also features a specially-penned afterword by British Museum curator Nicole Coolidge Rousmaniere. “Who would have thought that Buddha would have a passion for manga? What Nakamura has managed to do with Saint Young Men is to entertain, stimulate and keep us addicted to this wonderful friendship that never fails to make you see life around you slightly differently as a result,” writes Rousmaniere, who helped acquire pages from Saint Young Men for the British Museum’s genga collection.

Perhaps it was Jesus and Buddha looking like tourists and wearing slogan T-shirts on the cover of the first volume of Hikaru Nakamura’s Saint Young Men that first compelled me to pick up the manga at Kyoto Station in 2008. But from that moment I was hooked. My love affair with this manga shows no sign of abating at Volume 16 and I can only rejoice that Nakamura sensei’s work is being translated into English and will become available to English-speaking audiences with this new Kodansha edition.

Shortly after purchasing the first volume in Japan we accessioned it into the British Museum Japan section library and then shortly afterward displayed it in the Mitsubishi Corporation Japanese Galleries in the manga section display (Room 94). Soon we were trending on Twitter, and happily in a very positive light.

Only Hikaru Nakamura could have created a manga that centers on the theme of Buddha and Jesus renting a flat together in Tachikawa, Tokyo. The premise is that they are taking a gap year on Earth in order to understand modern Japanese life. They attempt to hide their identities and share everyday adventures, resulting in often hilarious situations. The series started off as a short-run gag manga in 2006 in Kodansha’s magazine Morning 2 under the encouragement of chief editor Kôhei Furukawa, and is still going strong and gaining more and more followers with each tankôbon (graphic novel) release.

Hikaru Nakamura is a young and incredibly popular manga artist who specialises in comedy. She broke into the mainstream manga world with her work Arakawa Under the Bridge (started in 2005), which chronicles the adventures of a compelling tribe of homeless characters living under a bridge in Tokyo. Her work was formally recognised in 2009 when she was awarded the prestigious Tezuka Osamu prize for her short stories for Saint Young Men.

Such was the interest at the British Museum in manga in general and in Hikaru Nakamura’s work in particular, I was able to curate a compact Asahi Shimbun “Objects in Focus” display at the British Museum at the very front of the museum in 2015 titled Manga Now. We featured three generations of manga artists—Chiba Tetsuya (b. 1939), Hoshino Yukinobu (b. 1954) and Nakamura Hikaru (b. 1984)—and in a few months drew close to 100,000 visitors of all ages. Each artist had a bespoke work for the exhibition and we illustrated a representative story from each in translation. The designer wanted the exhibition to feel as if one was entering a manga itself and with the drawings on frames inside the space and not against the wall.

We reached out to Hikaru Nakamura sensei initially, as you may have guessed, on Twitter. Soon afterwards we were lucky to be able to meet her editor at Kodansha, Kôji Tabuchi, who then after a thorough interrogation as to our intentions introduced us to Nakamura sensei herself. I have to admit to being a bit star-struck after following her work for so long. Meeting her was also a revelation. She was refreshingly open in discussing her challenges and discoveries in creating a manga on such a potentially controversial theme. Nakamura sensei mentioned she was surprised by the positive reactions to her manga and that she received a number of letters from religious specialists, university professors, Buddhist priests and Christian clergy. The readership seems quite broad judging by the letters she noted, ranging from young adults to people in their sixties.

Happily she donated a story to the British Museum and chose episode 69, “The Loveable Rascal in a Red Suit,” when Jesus Christ experiences Christmas, his birthday, in Japan, where the immense popularity of Santa Claus takes him by surprise. To calm down, Jesus takes a walk and accidentally finds his way into a confessional booth in a Catholic church, and confesses to the priest his unexpected jealousy of Santa’s popularity. I will not give the rest of the story away, but believe me it will be worth the wait for the translation. Her donation of this story was our own Christmas present and became pivotal for the Museum’s nascent genga collection and most certainly paved the way for the large manga exhibition at the British Museum in the summer of 2019. When we were creating this display in 2015 Saint Young Men was not yet translated into English as we undertook the task ourselves. Until doing this I had no idea how challenging it would be to translate Nakamura sensei’s puns and word plays into English. She is a wordsmith keeping her references topical to contemporary interests. Even Jesus and Buddha’s T-shirt slogan messages are all carefully curated to give an added punch and smile to her readers.

Nakamura sensei also donated the cover artwork for Volume 10 where Buddha is learning how to draw manga, a newly found passion of his. It is early morning, they have stayed up all night and Buddha is still going strong but Jesus has fallen asleep, G-pen still in hand. Who would have thought that Buddha would have a passion for manga? What Nakamura has managed to do with Saint Young Men is to entertain, stimulate and keep us addicted to this wonderful friendship that never fails to make you see life around you slightly differently as a result.