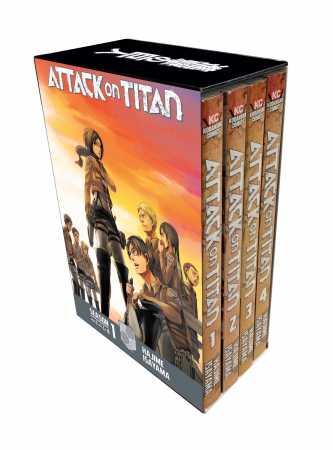 Are you ready for Attack on Titan? Begin reading the manga that became the megahit anime with this collectible four-volume box set! These four volumes roughly correspond to the first 13 episodes of the anime, the first half of season 1. Also includes two EXCLUSIVE sticker sheets featuring your favorite characters!

Humanity has been devastated by the bizarre, giant humanoids known as the Titans. Little is known about where they came from or why they are bent on consuming humanity. Seemingly unintelligent, they have roamed the world killing off humankind for years. For the past century, what’s left of mankind has hidden in a giant, three-walled city. People believe their 100-meter-high walls will protect them from the Titans, which are 10 to 20 meters tall. But the sudden appearance of of an immense Titan is about to change everything. 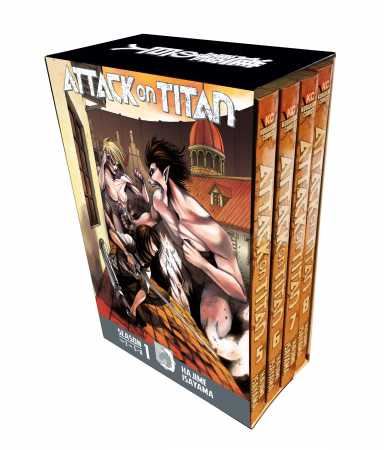 Continue your journey outside the walls with the manga that inspired the second half of season 1 of the hit anime Attack on Titan! Includes Vols. 5-8. Also includes two EXCLUSIVE sticker sheets featuring your favorite characters!

After helping the Garrison to victory, retaking Trost District from the Titans, Eren awakens in a prison cell. He may be a hero to the common people, but among the leaders of humanity, fear of Eren’s mysterious powers threatens his continued survival. It’s only the insistence of the tenacious and pragmatic Erwin Smith, leader of the Survey Corps, that wins Eren a chance: Prove himself outside the Walls, and bring the evidence from his family home back from Titan territory, and the rest of the military will let him live. 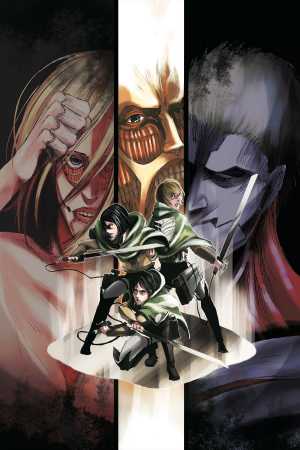 Eren is still resting from his brutal fight with the female Titan, when word reaches the interior that the impossible has happened: Wall Rose itself has been breached, and Titans are pouring through the gap! The emergency casts new urgency over Armin and Hange’s questions about how the Walls were built, and what humanity can do to restore them…