When there’s an anime adaptation of our manga, it’s a big deal for us! Especially if it’s an anime of a good shojo manga! For the Spring 2018 anime season starting in April, look for Real Girl  (a.k.a. “3D Kanojo”), our hit digital-first series about a relationship between an otaku boy who’s stuck in the 2-dimensional world, and his IRL “3D girlfriend”!

Celebrating the upcoming anime, for one week only, we’re offering Real Girl volumes 1-12—which comprises the complete series—up to 50% off on all digital platforms: BookWalker, comiXology, Google Play, iBooks, Kindle, Kobo, and nook. As always, when you’re curious about what the story is about before the anime comes out, check out the manga first! 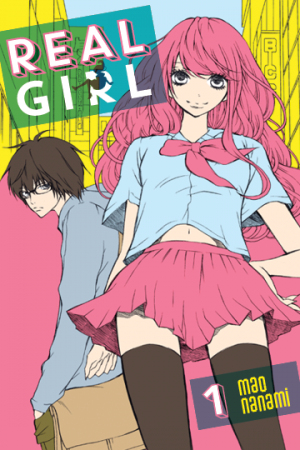 Real Girl by Mao Nanami
Hikari Tsutsui (a.k.a “Tsuttsun”) is a high school student who is content with his virtual life of anime and video games. One day, he gets stuck cleaning the pool with Iroha, a real live girl who is stylish, sassy and known to be easy with boys … and she aggressively approaches him! Tsuttsun, who has few friends and lives in his own world, finds himself smitten by the confident and wild Iroha … and his whole world is turned upside down!! It’s the awkward and pure love story of a boy who experiences relationship for the first time.

Read all of Chapter 1 right here: