To celebrate the release of the UQ HOLDER! anime, Kodansha Comics teamed with up Wacom in November for a special drawing giveaway contest! Contestants described what kind of original character they would create in the UQ HOLDER! universe, and the top entries were selected by UQ HOLDER! creator (and Wacom tablet user!) Ken Akamatsu himself. 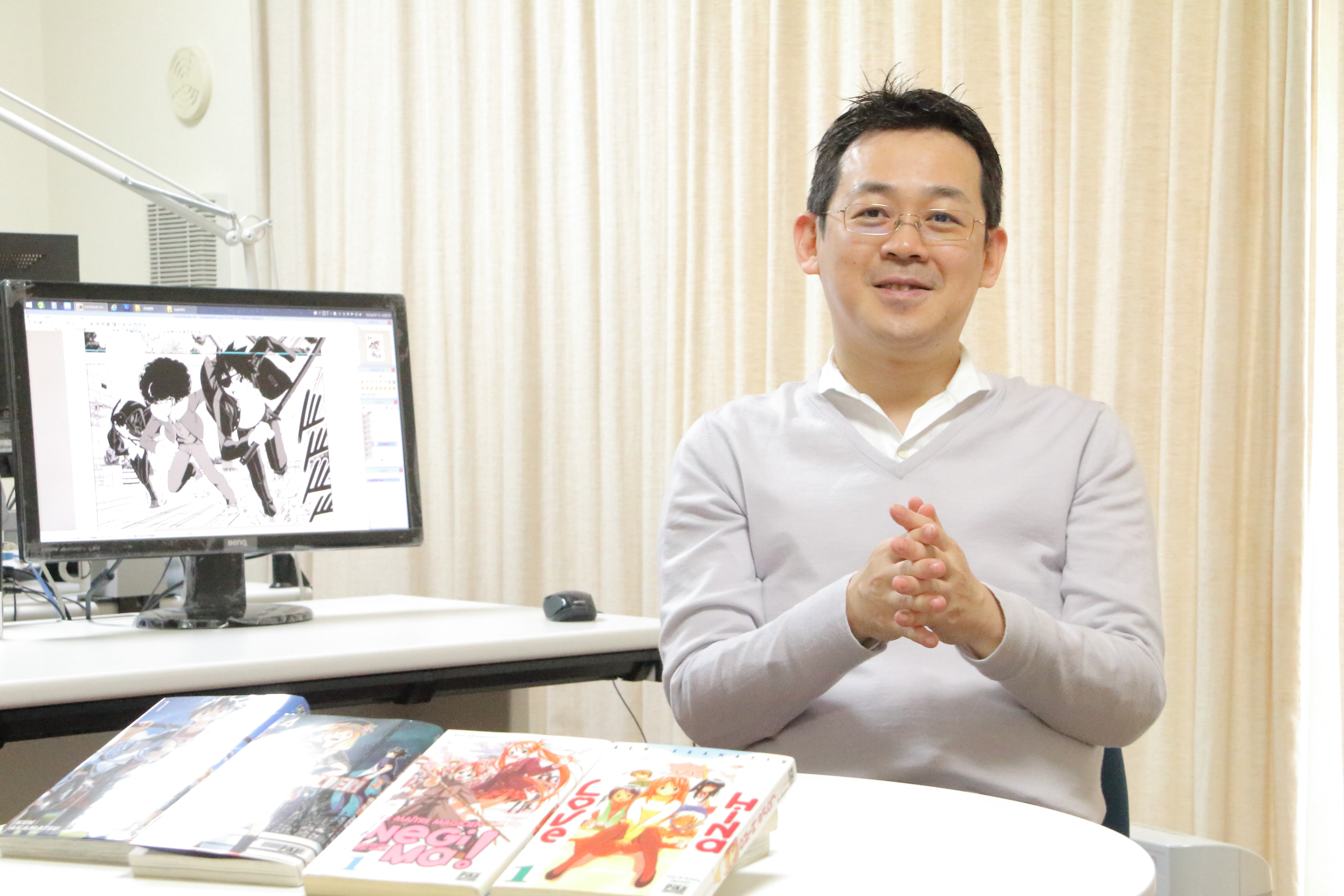 Kodansha Comics and Wacom enjoyed all the great artwork submitted by the contestants, and offer our congratulations to the prize winners! 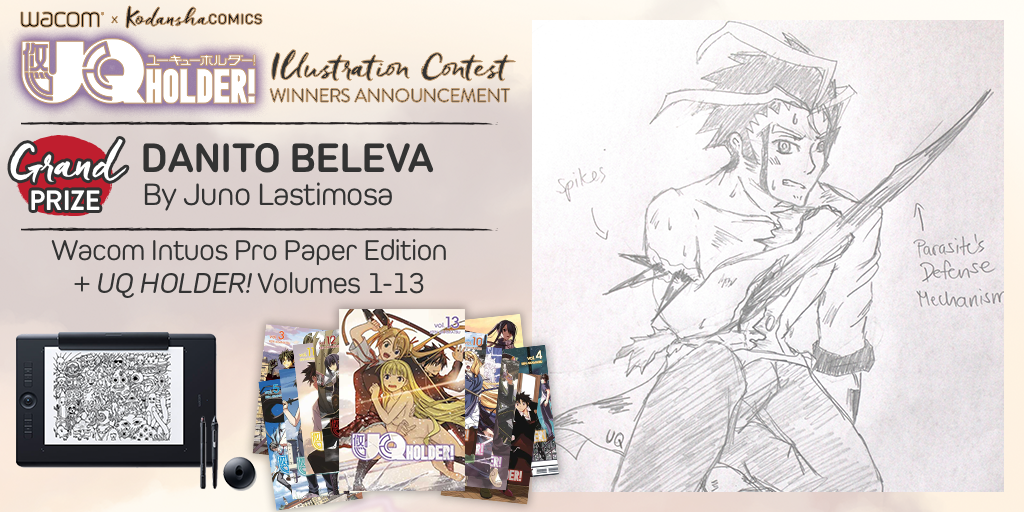 About the Character The newly-hired chef of the Senkyōkan, and the latest member of UQ HOLDER!

Before the grand opening, unemployed Danilo Baleva won the chance to be one of the first few people to climb the Orbital Station. Upon arriving at the top, an incident occurred, shattering the barrier between them and space. This had caused a nearly fatal open injury on the upper right side of Danilo’s body, and a parasite entered his body.

The parasite is the only one of its kind, and its powers include a healing/regeneration ability, defense mechanism (it produces spikes when Danilo’s heart rate increases), and adaptability to the cold. The parasite likes Yukihime because of her ice magic, but also hates her because she’s a blood-sucking vampire.

He became immortal when microorganisms entered his body through injuries after an accident. That concept is outstanding and awesome. Plus, the parasite doesn’t like high temperatures and is attracted to the ice-wielding Yukihime, so high points for the romantic comedy setup. And the character design is good, too. 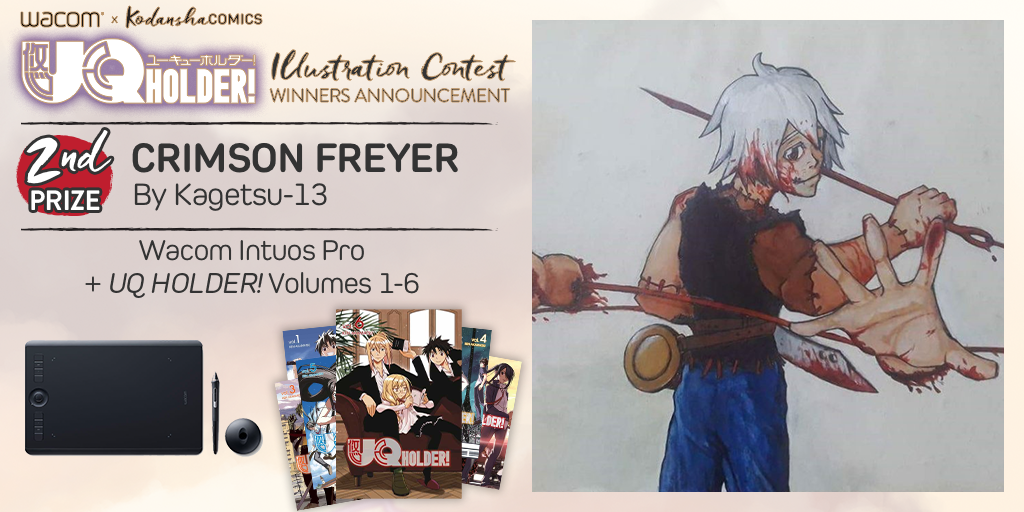 About the Character Known as the “Corpse Collector” in the underworld, Crimson is a zombie who roams the ruins of battles in search of “fresh corpses” to replace rotting body parts. As a zombie, he has the ability to control any severed body part through a thread linking to his main body.

Crimson couldn’t care less about human lives or emotions, and all he needs is to satisfy his eternal longing for fresh body parts. But what if he found a body that could never rot? An immortal body that would last forever and and wouldn’t have to be replaced, like Tōta’s… what would happen if these two ever met?

The “zombie” thing makes him sound more like an enemy character, but with his ability to control his body parts using string and trade out rotten parts, it’s just begging to be made into a manga, which is fantastic. Story ideas are coming to me just from looking at your character illustration. 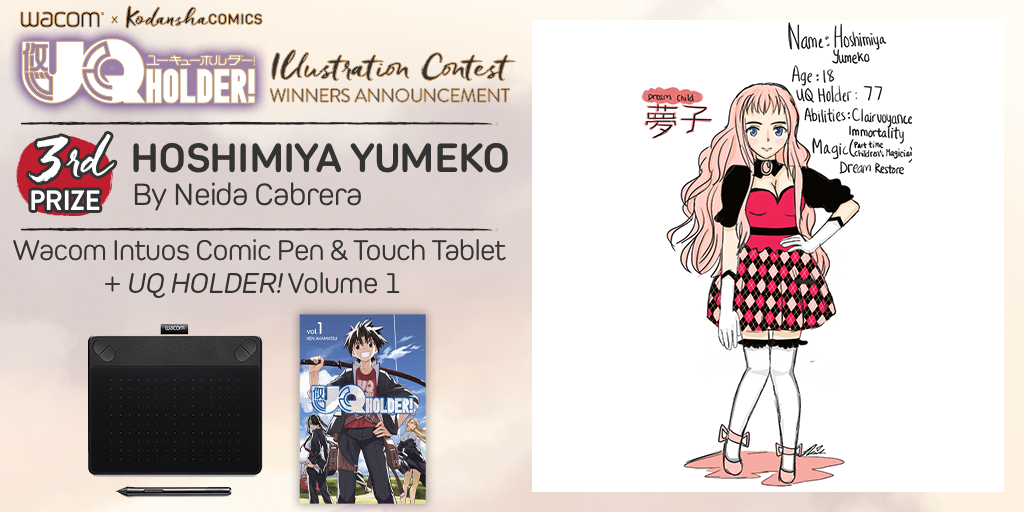 About the Character UQ HOLDER #77. She is born from an American mother and Japanese father (previously a member of the Magic Association). Yumeko is currently living in Kyoto as a part time magician for children, but is tasked to be a spy for Yukihime. She is not the strongest member of UQ HOLDER, but her immortality, combined with her clairvoyant abilities and quick healing abilities (Dream Restore) keep her in the Top 100 UQ HOLDERs. She is strong enough to defeat Tōta, but has a long way to go to beat Negi.

Yumeko-chan gets third place because she’s adorable (ha ha). Characters that take supportive roles because they aren’t the strongest fighters are in high demand in manga, and are often more popular than those power players. Smart approach.

Here’s the full gallery of entries, from grand prize to runners up!

Please visit www.wacom.com for the latest information on Wacom creative pen displays and pen tablets.  The advanced technology of Wacom’s intuitive digital input devices provide professional and enthusiast designers and artists with the ability to explore digital content creation in a comfortable and natural way. 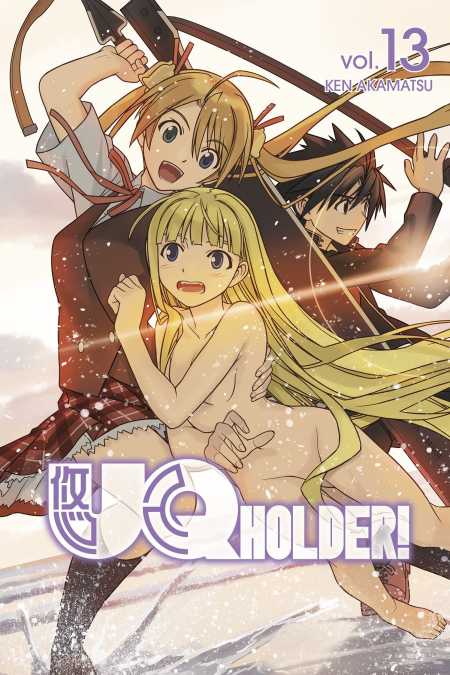 We would once again like to congratulate all the winners, and thank you to everyone who submitted to our # #UQHOLDERContest. To see all the winning entries, and a special, exclusive interview with Ken Akamatsu, be sure to pick up UQ HOLDER volume 13 – out March 13!