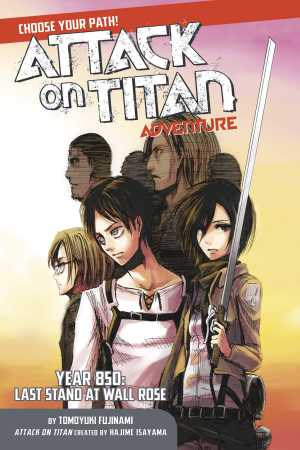 The following is the corrected text for pages 188 and 189, which will also appear in future printings of this book.

For a PDF of the corrected page layout of pages 188-189 click on this link.

● 233
You’ve survived the battle in the hellish streets of Trost District, and now you withdraw.

You and several of the other trainees fall back to the rear, to safety.

At last you’re in a safe place, full of Garrison soldiers. You…

If he was swallowed whole by the Titan, it might still be possible to rescue him. And with Mikasa’s skill…

Armin’s eyes widen at your words. You start to ask him what kind of Titan it was, what exactly happened, but Mikasa taps you on the shoulder.

“Forget it. If it were possible to save him, Armin would have done it.”

But she rises and takes a blade in her hand. You doubt she can best the Titan, but she isn’t going to give up, either. She’s a strong woman.

Even as you admire her, a Titan the size of a four-story building is coming relentlessly closer.

● 236
Outside, you see numerous Titan corpses.

This is what happens when Titans fight each other. Even on a battlefield full of the enemy, this is the first time you’ve seen so many fallen Titans in one place…

Did that Titan take out all these others single-handedly?

At the moment, the Titan has lost both its arms, but it sinks its teeth into two other Titans, kicks them, refuses to stop fighting. It seems to have regenerative abilities like other Titans, but it looks like its powers just can’t keep up…

“If we could understand what that Titan is…” somebody murmurs.

You agree…but it doesn’t look like you’ll have the chance.

The mysterious Titan topples the last of the nearby enemies, then sinks to its knees, exhausted. (Go to 282)

You ask around the guard unit in hopes of getting news about other members of the 104th Training Corps.

You learn that many of your classmates are dead, or missing in action.

(If you did not already know about the fate of Squad 34, mark Eren Yeager and Squad 34 dead.)

You think of Eren and his companions, so full of spirit.

Mikasa was so close to him. What will she think when she finds out? (Go to 252)