Attack on Titan Anthology opens up the world of manga, with Attack on Titan providing a creative playground for comic-book writers and artists from around the world. Every one of these creators has offered their own unique take on original Attack on Titan creator Hajime Isayama's dark vision.

With the Attack on Titan Anthology Creator Profiles—a new video series on Kodansha Comics YouTube Channel—we introduce some of the talents behind this project. Ronald Wimberly: Artist of “Bahamut” in Attack on Titan Anthology

Ronald Wimberly is a designer based in NY city. He works primarily in narrative. He's worked with The New Yorker, Dargaud, DC, Marvel, Image, Darkhorse, Nike, Benetton and others. Some notable works are the Eisner Award-nomated Sentences for Vertigo, Lighten Up for the Nib on Medium, and Prince of Cats. He's been twice selected for the Maison des Auteurs residency in Angouleme and is the 2016 Columbus Museum of Art/Thurber House 2016 Graphic Novelist Artist in residence. He's exhibited in New York, Tokyo, and Paris.
More about Ronald Wimberly: http://ronaldwimberly.com/
Follow on 8app:  https://the8app.com/user/RonaldWimberly
Follow on Instagram: https://www.instagram.com/ronaldwimberly/
WATCH THIS VIDEO Genevieve Valentine is the author of novels Mechanique, The Girls at the Kingfisher Club, Persona, and Icon. Her essay and reviews have appeared at The New York Times, The AV Club, and The Atlantic. She’s written Catwoman and Batman and Robin Eternal for DC Comics and Xena: Warrior Princess for Dynamite. She has worked on “An Illustrated Guide to the Glorious Walles Cities” in the Attack on Titan Anthology. More about Genevieve Valentine: genevievevalentine.com

Jeanine Shaefer is a freelance comics editor and project manager for The Attack on Titan Anthology. WATCH THIS VIDEO 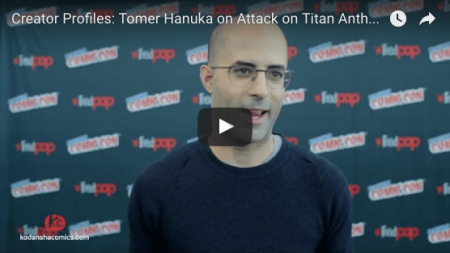 Tomer Hanuka: Artist of "Memory Maze" in Attack on Titan Anthology
NY Times best selling artist Tomer Hanuka has been illustrating for magazines, film studios, ad agencies and book publishers. He illustrated covers for The New Yorker, The New York Times, Newsweek and many others. Hanuka won multiple industry awards, including Gold medals from The Society of Illustrators and The Society of Publication Designers. A monograph of his work titled Overkill was published in 2012. The Divine, a Hugo nominated graphic novel he co-created was published in 2015, made The New York Times best seller list and won the International Manga Award. More about Tomer Hanuka: www.thanuka.com
WATCH THIS VIDEO 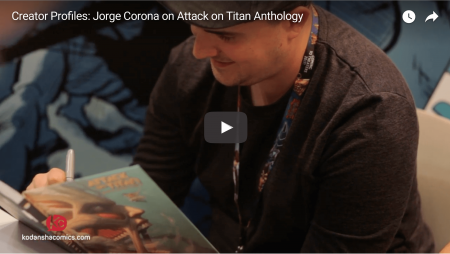 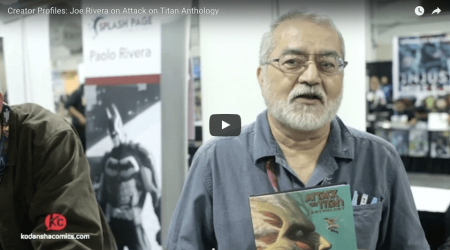 Joe Rivera: Ink artist for Attack on Titan Anthology
Joe Rivera is an inker, custom-motorcycle artist, and the father of Paolo Rivera. He often collaborates with his son, including Mark Waid's Daredevil series, for which they won two Eisner Awards. Most recently, he inked Paolo's pinups for the Attack on Titan Anthology. He lives in Daytona Beach, Florida.
WATCH THIS VIDEO 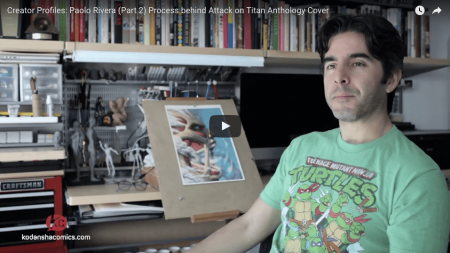 Paolo Rivera: Cover and Pinup Artist for Attack on Titan Anthology
Paolo Rivera is an Eisner Award-winning comic-book artist from Daytona Beach, Florida. A graduate of the Rhode Island School of Design, he started working for Marvel before his senior year. He is best known for his run on Daredevil, as well as his many painted covers and posters. Most recently he worked on the cover and pinups for Attack on Titan Anthology. He currently lives with his wife and daughter in San Francisco, California. More about Paolo Rivera: paolorivera.com.
WATCH THIS VIDEO