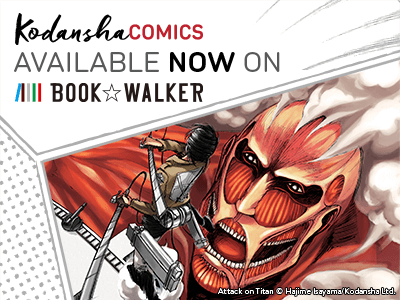 Yes, a new place to buy digital Kodansha Comics: starting from October 25 we've adding our entire catalog of manga to the BookWalker Global’s ebook store, with new releases to be added as they come out!

And to celebrate, BookWalker is offering 18% off for all eBooks. The iOS BookWalker apps for iPhone and iPad are now available on the Apple App store or the BookWalker Android apps on Google Play.

About BOOKWALKER
BookWalker is one of Japan's most popular reading platforms for digital manga & light novels. There have already been over 1.5 million downloads of the BookWalker apps and users are enjoying 300,000 titles from over 700 publishers including Kodansha, Shueisha, Square Enix, KADOKAWA and more. BOOK WALKER Co. Ltd. is a member of KADOKAWA CORPORATION and was founded in 2010. Visit the Japanese site at bookwalker.jp or English site global.bookwalker.jp.