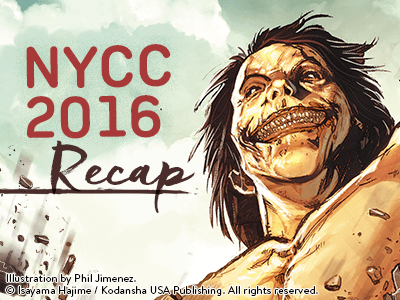 Wanna know what Kodansha Comics has been announcing at New York Comic Con 2016?!? Here's the recap of our license announcements and summaries of our panels, in case you weren't there!

The editorial staff from Kodansha USA Publishing just announced a bevy of new licenses, to be published in 2017! Plus Yasuyuki Mimura, the Japanese editor of Inuyashiki and Devil's Line, shared his knowledge and experience making seinen manga in Japan.

Regarding My Reincarnation as a Slime (Tentative Title)
By Fuse, art by Taiki Kawakami
Genre: fantasy, action-adventure, comedy

A regular, 37-year old working man gets a chance to start life in a fantasy world after being killed. There’s just one catch: he’s been reincarnated as a blind slime with magical powers. This is “trapped in a video game world” done in an entirely new way. There’s plenty of fantasy action and nods to old-school rpg fans, but the comedy makes this title truly fresh!

Fairy Tail: Rhodonite
By Kyouta Shibano, based on Fairy Tail by Hiro Mashima

The second standalone story in the series published as Fairy Tail Gaiden in Japan follows the popular, tough, but lovable Gajeel Redfox! When Gajeel runs into an old friend, he is roped into the intrigue of a crime syndicate in his hometown. Fairy Tail fans won’t want to miss this chance to learn about the past of the Iron Dragon Slayer!

From the creator of Otome Yokai Zakuro and character designer of acclaimed anime Mawaru Penguindrum comes another whimsical, modern fairy tale! 14-year-old Sasakura’s normal life is shaken up when she comes home to find a giant, mascot-like creature in her house. This kigurumi spirit, named Ginger, tasks her with protecting the world. If that’s not enough to take on, Ginger can also transform into a handsome young man. Fans of Hoshino Lily’s beautiful artwork and creative worldbuilding won’t be disappointed!

Kiss Me at the Stroke of Midnight
By Mikimoto Rin

To most people, Hinana is a model high school student, but she secretly yearns for a fairy tale romance straight out of a shojo manga. She finally gets the chance to meet her prince when Ayase, a popular actorr, shows up at her high school. But this prince isn’t a charming knight at all… he’s actually a pervert! Fans of shojo romance will love this send up of tropes, and readers looking for a new take on a classic setup will find a lot to love.

Waiting for Spring
By Anashin

Mitsuki has been always been a loner, but high school offers the chance to break out of her shell and try to open up to people. The true friendship she seeks arrive in the unexpected form of four handsome guys from the basketball team! Mitsuki realizes there’s more than meets the eye to this boys, and together this unlikely group may be able to help her learn to really connect with others. Fans of strong heroines like Mei in Say I Love You and the quirky friendship dynamics of Kiss Him Not Me – don’t miss this one!

Love and Lies
By Tsumugi Musawo

In an alternate future Japan, marriage partners are assigned by the government when people are only 16 years old. Love and passion are strictly forbidden! In this environment, high schooler Yukari must deal with his secret love for a beautiful classmate. On top of that, his spirited marriage partner could prove to be an obstacle or a helpful hand in love. Anyone looking for a dystopian twist on schoo life romance won’t want to miss Love and Lies.

Yoshiko is a truly clueless high school girl whose spaciness reaches impressive heights. From getting all 0’s on a test to her single-minded obsession with bananas, it’s never a dull moment with her. Her childhood friend tasks himself with watching out for her at school, and is roped into her hijinks. This hilarious, 4-panel style manga is a perfect fit for fans of school life comedy like Nichijou and Azumanga Daioh.

Satoshi, a 16-year-old high school student, gets a job as a caretaker of a beautiful mansion surrounded by roses. He is drawn to Shizu, the mysterious girl who lives there. Behind her blank stare lurks a supernatural secret, and Satoshi wants to help her. But can he overcome his fear of ghosts to get closer to this strange girl? Wake Up, Sleeping Beauty is a sweet and magical shojo that will hit the spot for any fan of supernatural romance!

From the creator of the fantasy hit The Ancient Magus’ Bride, Kore Yamazaki, comes a josei reinterpretation of the classic Faust legend. An unlikely partnership forms when traveling scholar Joanna Faust comes across a down-and-out boy in search of books. She offers to be his teacher in exchange for his help in her search for something important to her. Fans of cool female characters and intricate fantasy details will get lost in the world of Frau Faust.

Land of the Lustrous
By Ichikawa Haruko

In the distant future, a new immortal and genderless life form called Gems populate the Earth. The 28 Gems must fight against the Moon Dwellers, who attack them regularly to abduct them and to turn them into decorations.
Being only 300 years old, Phosphophyllite is the youngest of the Gems and has no assignment yet. He wants to help to fight the Moon Dwellers, but is too weak and brittle for battle. He finds his calling when the  master of Gems assigns him the task of creating a natural history encyclopedia.

The unique premise and deep world of Land of the Lustrous has already captivated Japanese readers! It placed number 10 on the 2014 Kono Manga ga Sugoi! Top 20 Manga for Male Readers survey, and was nominated for the Manga Taisho awards in 2015. 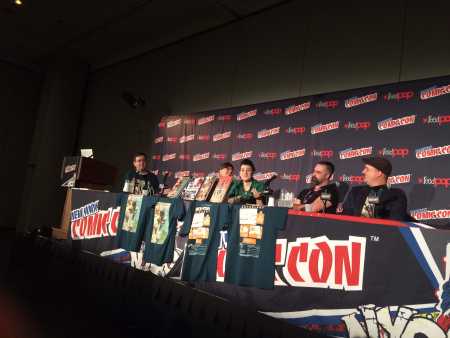 Attack on Titan Anthology NYCC edition and exclusive T-shirts were for sale at the Kodansha Booth (#2109).

After several years of hard work by comics super talents, the special edition of Attack on Titan Anthology debuted at New York Comic Con this year before it's actual street date on October 18. 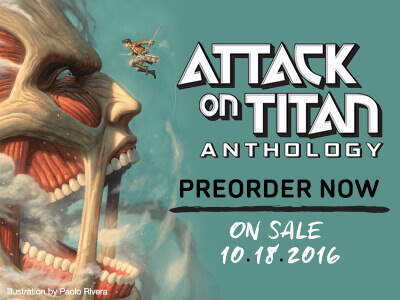