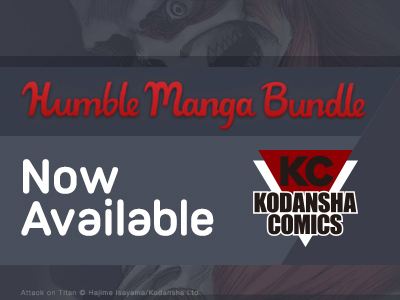 Update: ONLY TWO MORE DAYS for the first-ever Humble Manga Bundle! Kodansha Comics has teamed up with our good pals at Humble Bundle, the phenomenal pay-what-you-want digital book bundler, on the first volumes of 10 digital manga series.

While manga has appeared in previous Humble Bundle book bundles, this is Humble Bundle's first entirely manga bundle. For this first Humble Bundle offering, we've put together a collection of our best science-fiction and fantasy series:

Pay $17 or more for all of that, plus the just-released (as of yesterday) Battle Angel Alita: Last Order Omnibus Volume 1, The Seven Deadly Sins Volume 1, Knights of Sidonia Volume 1, Ajin: Demi-Human Volume 2, and Attack on Titan Volume 3.

Name your price. Together, the books in this bundle usually cost as much as $177. At Humble Bundle, though, you choose the price!

Read them anywhere. These comics are available in multiple formats including CBZ, PDF, and ePub, so they work on your computer, e-readers, iPads, cell phones, and a wide array of mobile devices! Instructions and a list of recommended reading programs can be found here.

Support charity. Choose where the money goes—between Kodansha Comics, three charities (Comic Book Legal Defense Fund, Worldreader, and Mental Health Foundation), and, if you'd like, a fourth charity of your choice via the PayPal Giving Fund. For details on how this works, click here. If you like this bundle or like what Humble Bundle does, you can leave a Humble Tip too.