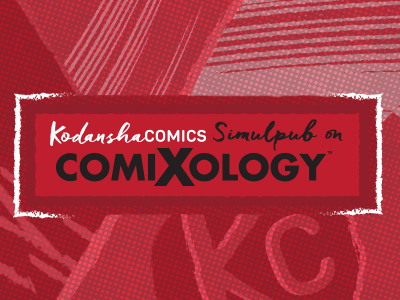 ComiXology and Amazon announced today the launch of new chapters from Kodansha Comics' best-selling manga series to be available in English the same day they are published in Japan ("simulpubs"), on both the comiXology platform as well as Amazon’s Kindle Store.

Brand-new chapters of Attack on Titan Chapter 80 and The Heroic Legend of Arslan Chapter 34 go on sale today (April 8) on comiXology and Kindle, the same day they appear in Bessatsu Shonen magazine in Japan. All previous chapters from both series are also available.

There are a total of 17 Kodansha Comics series debuting with simultaneous publication. Today also sees the launch of over 1,900 chapters, creating a vast library for fans that want to dive in for the first time or get caught up before new chapters digitally debut in English.

“English readers can now buy chapters of their favorite manga series the same day Japanese fans are picking up new issues in convenience stores,” said Alvin Lu, General Manager at Kodansha Advanced Media. “A simulpub initiative has never been done like this before—it’s effectively a new format and it’s made possible by digital publishing. Doing this through comiXology and Amazon connects the global readership for this broad range of series at a level we’ve never seen.”

“We’re so excited to completely cut the wait time for English-speaking manga fans to no wait at all to read same day as Japan releases of their favorite Kodansha titles” said comiXology’s Senior Director of Communication, Chip Mosher. “Immediate access to new popular Kodansha manga is something we know both comiXology and Kindle fans love and we’re thrilled to be able to provide that access to manga fans everywhere on the same day all around the world.”

The launch of this unprecedented program on comiXology and Kindle worldwide, makes same-day manga chapters more widely available to English-language readers than ever before. (These English translations will not be available in Japan.)

Included in today’s launch are the following series, to be released in English on comiXology and Kindle on a weekly as well as bi-weekly, monthly, and semi-regular basis:

Monthly
Ajin: Demi-Human
Attack on Titan
Kiss Him, Not Me
The Heroic Legend of Arslan
Magatsuki
Persona Q: Shadow of the Labyrinth Side: P4
Sweetness and Lightning