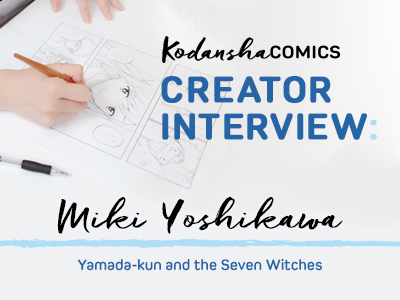 Miki Yoshikawa has exceptional talent. Not only because she’s a female mangaka who’s succeeded in shonen manga, but because her approach to manga is so genuine. If you ever get lucky enough to meet her, you’ll quickly realize what makes her a such a unique person is also what makes the characters in her manga so much like real people. 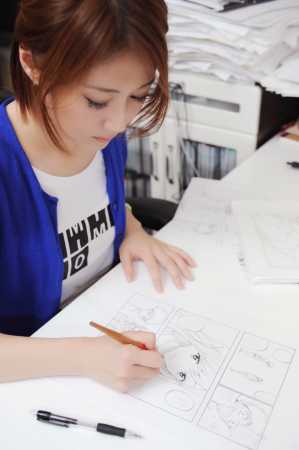 Miki Yoshikawa made her pro manga debut in 2003 with Glory Days, a one-shot in Kodansha’s Magazine Special. After a stint as an assistant for Hiro Mashima (Fairy Tail), she published another one-shot, Yankee-kun to Megane-chan, in Shonen Magazine Wonder in 2005. Thanks to its deft comedic touch, Yankee-kun went on to become a short series and later Yoshikawa’s first long-running series in Weekly Shonen Magazine. It was adapted into a live-action drama in 2010-11. Yoshikawa’s best known work, Yamada-kun and the Seven Witches, started serialization in 2012 and has since sold more than 3 million copies. It’s been adapted into a live-action drama, in 2013, and a TV anime (streaming on Crunchyroll), in 2015. 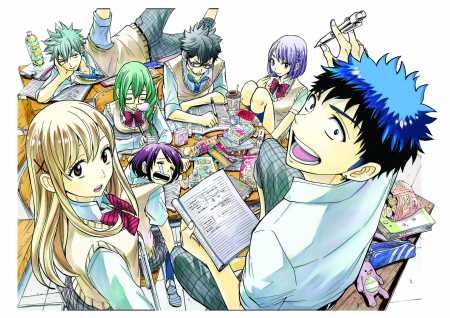 Kodansha Comics (KC): How did you become a mangaka?

Miki Yoshikawa (MY): When I was nineteen, I just drew a manga and sent it in to a contest. I sort of studied other manga and picked up how to draw. Then one day, my current editor called me and asked, “Do you want to become a mangaka?” Out of pure excitement, I said, “YES!” [laughs] That was the beginning of everything. 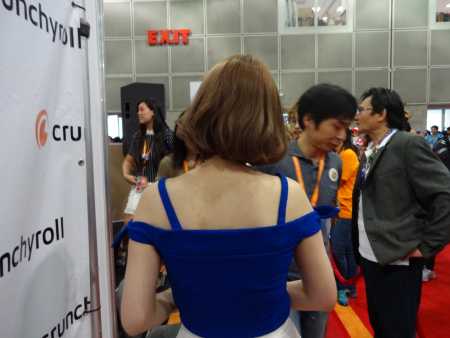 Yoshikawa and her editor at Anime Expo 2015

KC: What was the editor's advice at the time?

MY: I remember telling my editor this was actually the first time I’d ever drawn manga, so it might be a little rough. He totally agreed with me. [laughs] I appreciated his honesty, though. I know he wouldn’t give me false praise if the manga wasn’t actually interesting. That’s what make it so easy to work with him. We’ve been working together ever since—leading up to my debut and also on my current series.

KC: You’ve also worked as an assistant for Hiro Mashima (the creator of Fairy Tail).

MY: After my editor contacted me, I really thought I could be a mangaka. But I also knew that I had to get better. At that time, Mashima-sensei was looking for an assistant, and I knew I wanted to work with him. 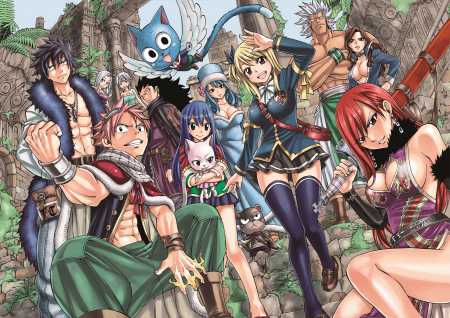 KC: Why did you want to work with Mashima-sensei?

MY: Maybe our taste in art was sort of similar? At that time, there weren’t that many artists that drew in that kind of clear and simple style for Weekly Shonen Magazine. Other manga in the magazine were drawn very intricately, and with shiny eyes and stuff. So I thought to myself, if I’m going to become a mangaka’s assistant for Shonen Magazine, it has to be under Mashima-sensei.

KC: Was it hard to be an assistant for Mashima-sensei?

MY: Actually, not at all. We got along really well and shared a bunch of interests, like in movies and video games. Frankly, at that time, I didn’t have any skills as a manga assistant. But he didn’t really care about that. What he cared more about was if you could get along with him and his staff. 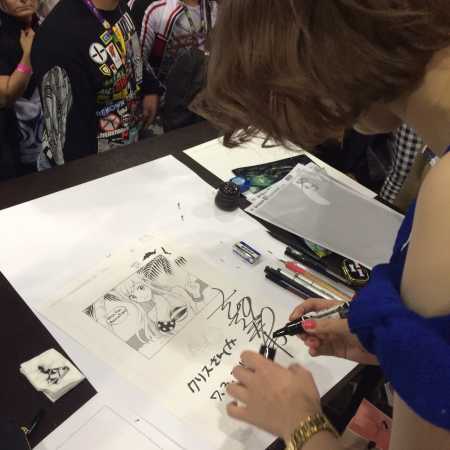 
KC: What did you do as an assistant for Mashima-sensei?

MY: I worked with him for about four years, with four other people. I usually worked on backgrounds, inking, drawing patterns or applying screentones, and some hand-drawn letters. But all the characters were drawn by Mashima-sensei himself.

KC: Did you draw your own manga during that time?

MY: I was working on my own manga while I was doing assistant work for Mashima-sensei. But to be honest, I was slacking off on my own work, because it was just so much fun to be his assistant.

KC:  Could you describe the work environment at that time?

MY: Everybody was quite chatty. During breaks, we just played video games together. There were always five of us, so we played multi-player games for Nintendo, like Mario Kart or Mario Party. Everybody got so serious, it got pretty intense. Some days we just spent playing games and completely forgot about drawing manga. [laughs] 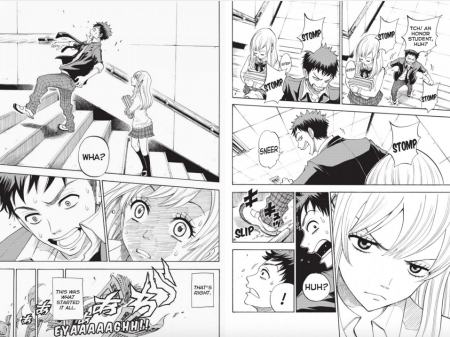 From the first chapter of Yamada-kun and the Seven Witches

KC: The first chapter of Yamada-kun and the Seven Witches starts off as a typical romantic comedy. Then you realize pretty quickly it’s not going that way at all. Was this intentional?

MY: Yes, totally. [laughs] Early on in the series I received a lot of fan mail predicting it was going to be another typical, easy-to-understand romantic comedy. Reading those letters, I couldn’t stop smirking, because deep inside I knew their expectations were going to get upset eventually.

KC: Yamada-kun and the Seven Witches is about witches who are students in a normal high school who deal with real-life problems, instead of just magic. How did you decide each of their powers and the underlying struggle?

MY: If you really think about it, all of the witches’ powers are psychological instead physical. I really hope someone in junior high or high school will read this manga and feel sympathy—or realize they aren’t the only ones who are dealing with these issues. If this series was focused on physical power, then the message would be completely different. Instead of working on a manga about a full-on fantasy world, I wanted Yamada-kun to be set in a reality where magic could exist. 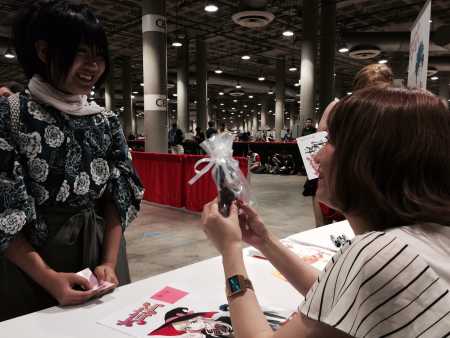 Yoshikawa taking to fans during the signing

KC: Do you ever get stuck making manga?

MY: Of course I get like that almost every time. I always ask myself a questions like, “What’s going to happen next?” Or, “Where am I going to take this?” But it’s not exactly about what I want to do with the story. Each character has a different personality and course of action. When I focus on thinking about “What would this character do?” or “What would this character do in this case?”, usually I don’t have to be stuck.

KC: Do you ever talk to the characters?

MY: When I’m drawing them, I am not me. I completely become the character. For example, Yamada is sort of a “bad boy” character who speaks roughly. When I’m drawing Yamada-kun, my language becomes really rough. [laughs] People think I’m always mad or something. 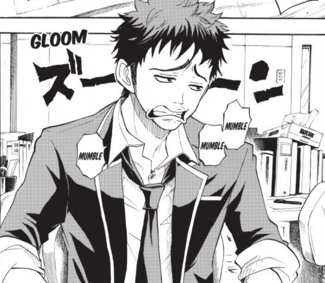 MY: It’s actually not a conscious decision. But when I draw a main character of a shonen manga, it always turns out to be a sort of “bad boy” character. It’s probably because of where I grew up. Everybody sort of spoke roughly. To me, they’re not scary at all. But if you weren’t from that area, those guys might look kind of scary to you.

KC: Shonen manga is usually by boys for boys. How does it feel to be a female mangaka in this field?

MY: Well, I was never really a girly girl to begin with, so I never really thought about it like that. All the friends I grew up with were boys, and I only read shonen manga—like Dragon Ball. When I started to draw manga, I didn’t really feel like I could draw manga for a female audience. 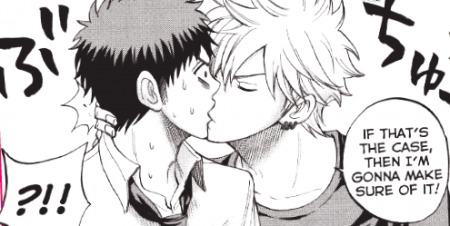 There are many kissing scenes in this series

KC: There are scenes in Yamada-kun, like two boys kissing each other. Did you think it was going to be controversial?

MY: That was a total gamble. [laughs] Most of the readers of Weekly Shonen Magazine are boys, so I wasn’t sure how they’d feel seeing two boys kissing, so I took a chance. But actually, people thought it was funny. It actually made the series more popular. I couldn’t have predicted that.

KC: Do you have an ending in mind?

MY: Yes, and no, because it’s always changing as the story progresses.

KC: Any message for the fans?

MY: I knew there were fans of Yamada-kun and the Seven Witches overseas. But coming to America, and meeting some of them, made me realize it’s really true and encourages me to work harder. I hope you support my manga in the future. 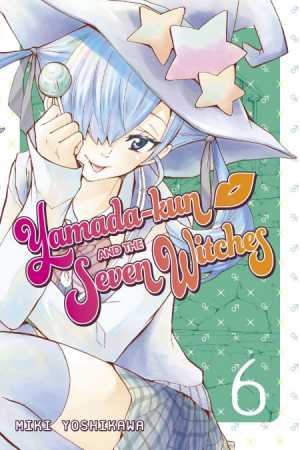 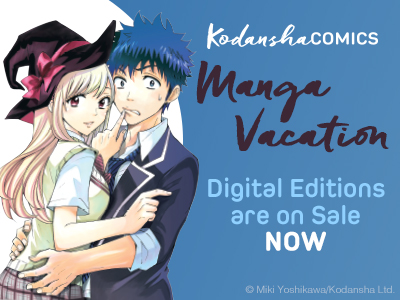 Hurry! Yamada-kun and the Seven Witches Volume1 is available for a limited time
for only 99-cents on Kindle, iBooks, nook, Kobo, and comiXology (sale ends on 1/21/2016)!